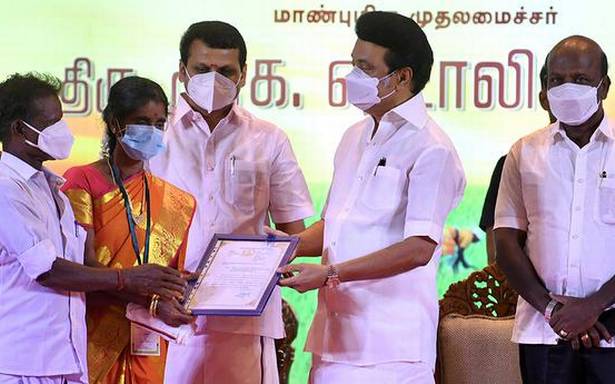 It involves huge expenditure for the government, says the Chief Minister

Chief Minister M.K. Stalin on Thursday made a strong case for the judicious use of power by farmers, saying that power generation involved huge expenditure for the government.

The Chief Minister said the government had taken steps to prevent line loss and launched the ‘minnagam’ app for consumers to file complaints and for them to be resolved.

“We have resolved 90% complaints. Since Tangedco is directly connected to the people, I have asked the Minister to make it free from complaints,” Mr. Stalin said.

He said one should not conclude that Tangedco is wealthy. “The rulers of the past regime spoiled it. It has debt to the tune of ₹1.59 lakh crore, and is paying ₹16,000 crore as interest a year. The AIADMK government procured power for a higher amount,” he said.

Recalling Electricity Minister Senthilbalaji’s allegation that maintenance was not carried out for 10 years, he said: “Of the 1,481 MW power capacity installed during the AIADMK regime, 1,428 MW was planned during the rule of Kalaignar [former Chief Minister M. Karunanidhi] between 2001 and 2006”. “The AIADMK regime installed only 53 MW in ten years. We have taken steps to save Tangedco and have plans to generate 17,980 MW in ten years,” he said.

Announcing the government’s plan to accord priority to solar power, Mr. Stalin said the first solar park would be set up in Tiruvarur.

“We have signed an MOU with the Indian Renewable Energy Development Agency for consultation on solar and hydro power, and to mobilise ₹1,32,500 crore. We are the only State to sign such a mega agreement for renewable energy,” he said.