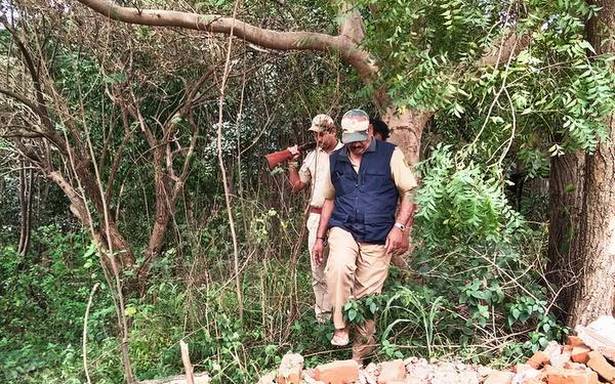 With a leopard being sighted in the vicinity of Nrupatunga Hills and surrounding localities in Hubballi, 13 schools have been closed and people in many localities are in a state of panic as the Forest Department has failed to capture the wild animal, Abbayya Prasad of the Congress told the Legislative Assembly on Wednesday.

Mr. Prasad raised the issue during Zero Hour and said that people in seven or eight villages have been in a state of panic fearing that the leopard may attack them during the night. The former Chief Minister Jagadish Shettar said that people sighted the leopard on September 15 and still, the Forest Department officials have failed to trap it.

Public Works Minister Govind M. Karjol, who replied on behalf of Forest Minister Umesh Katti, said that various teams of the Forest Department have already taken steps to trace the wild animal that has strayed into a residential area.

The forest personnel have been keeping vigil and traps have been set up at Nrupatunga Hills where the animal is said to have been sighted, he said. Member M.P. Renukacharya, among others, too spoke about the menace of wild animals in their constituencies and urged the department to take swift action to allay fears among people about elephants and leopards straying into localities.