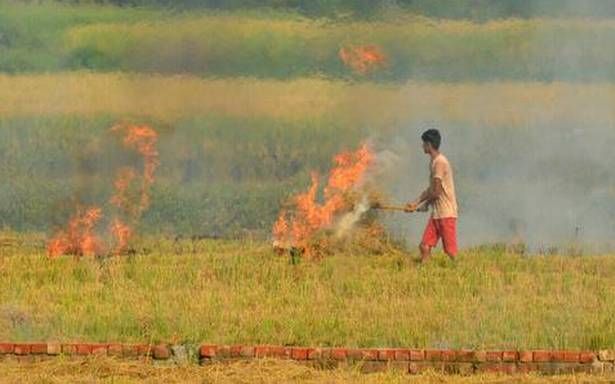 Environment Minister Gopal Rai said the solution has been given free of cost to farmers who will spray it in over 4,000 acres

The Delhi government, in a move to provide an alternative to stubble burning and combat air pollution, will on Monday start its campaign to use bio-decomposer solution on farmlands under its winter action plan.

Environment Minister Gopal Rai said the solution has been given free of cost to farmers who will spray it in over 4,000 acres. Last year, the solution was tried out in about 2,000 acres and the government claimed that it had yielded good results.

Mr. Rai said there has been excitement among farmers after a third-party audit report of the solution showed positive results. “The Kejriwal government has appealed to all the States to help their farmers in decomposing the stubble by bearing the entire cost of spraying the bio-decomposer like the Delhi government is doing. From making the solution to its spraying in the field, the entire process costs less than ₹1,000 per acre,” Mr. Rai said.

He further said that the Commission for Air Quality Management (CAQM) too has ordered all States to use the bio-decomposer solution after the Delhi government submitted the third-party audit report.

“WAPCOS, a Central government agency, had conducted the third-party audit of the impact of spraying the bio-decomposer on the stubble. The agency in its report has described the bio-decomposer a better solution for stubble decomposition,” the Minister said.

The solution has been prepared in collaboration with Indian Agricultural Research Institute, Pusa, and the government is spending about ₹50 lakh from making the solution to spraying it, Mr. Rai added.