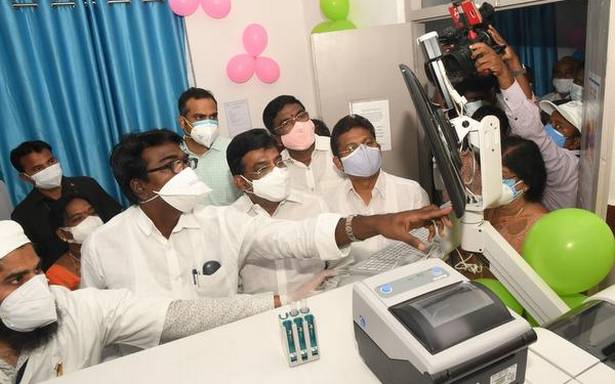 The state-of-the-art laboratory in Khammam will conduct as many as 57 types of biochemistry, pathology and microbiology tests

The public healthcare infrastructure, including the bed strength in the government hospitals in the old undivided Khammam district, is poised to expand manifold with the sanction of 100-bed hospitals each in Sattupalli and Madhira as well as the Government Medical College in Kothagudem, said Transport Minister P Ajay Kumar.

He was speaking after inaugurating a state-of-the-art laboratory christened as Telangana Diagnostics Hub in the District Headquarters Hospital here on Wednesday. The modern laboratory will offer free diagnostic services on a hub-and-spoke model. It will conduct a range of as many as 57 types of biochemistry, pathology and microbiology tests.

Talking to mediapersons at the hospital premises along with Khammam MP Nama Nageswara Rao, the Minister said the Telangana diagnostic labs were set up in the district headquarters hospitals in Khammam and Kothagudem and elsewhere in the State at a cost of ₹ 1.50 crore each to offer free diagnostic services to needy patients. To help people living in semi-urban and rural areas gain access to modern diagnostic services, Chief Minister K Chandrasekhar Rao has decided to add cancer detection equipment, 2D Echo, ECG, ultrasound and mammography devices to the Telangana diagnostic hubs, Mr Ajay said.

The services of these modern labs can be availed by needy patients by giving blood and urine samples at the PHCs in their respective mandals, the results of which will be made available to them online after testing at the diagnostic hubs, he noted, saying separate vehicles were arranged to transfer the samples to the diagnostic hub from the PHCs in a prompt manner.

Thanks to the special focus on public health infrastructure, the bed strength has increased from 250 to 550 at the District Headquarters Hospital in Khammam in addition to the 150 beds at the Mother and Child Health (MCH) block of the hospital. The decision of the State government to set up a medical college in Kothagudem will pave the way for setting up an 800-bed hospital attached to the college thereby immensely benefiting Bhadradri-Kothagudem district in terms of expanding medical education opportunities and public healthcare services.

Later, the Minister inaugurated the Telangana diagnostic lab at the District Headquarters Hospital in Kothagudem of Bhadradri-Kothagudem district. Kothagudem MLA V Venkateshwara Rao, Collector D Anudeep and others were present.