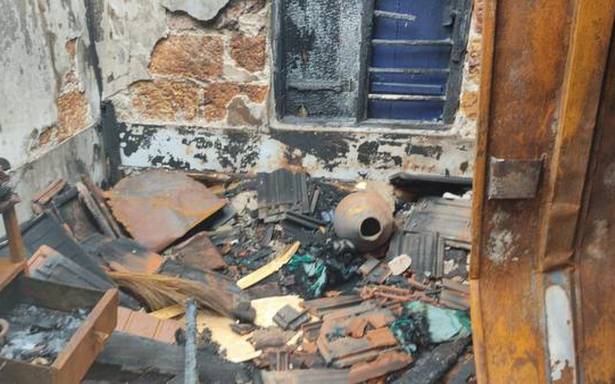 Family has been sleeping amid rubble for a month

After their home at Pachalam caught fire early in December, Edwin D’costa and his family have been living amid the rubble for a month now.

Firemen told Mr. D’costa that the fire was caused by a short circuit in the building that the family has taken on lease. But the owner of the building refused to take the explanation and has not returned the lease amount of ₹5 lakh despite repeated entreaties, he said.

They noticed the fire around 3 a.m. and could only save themselves, Mr. D’costa said. Their belongings, including clothes, utensils, appliances and documents, were almost entirely charred or destroyed, he added.

The family, comprising Mr. D’costa’s wife, 96-year-old mother, and son, have been sleeping in a makeshift shed in the verandah of the building, largely exposed to the elements, he said. Since the wiring was shot, there is no electricity.

They contacted the local V4 Kochi activists who helped send a complaint to the Chief Minister’s office. “It was forwarded to the District Collector and the police chief. But nobody has turned up to examine the site or address the situation in the past 10 days,” said Jacob John, V4 Kochi North Zone controller.