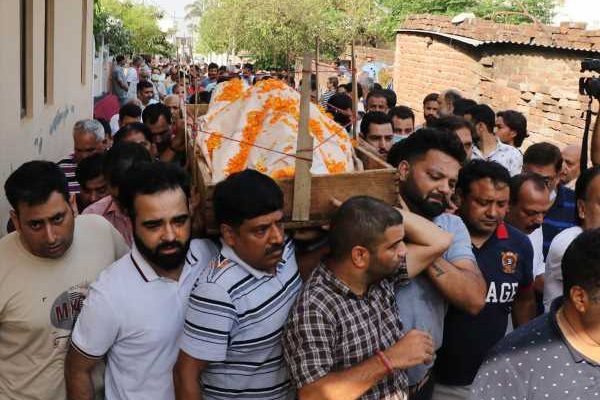 ‘The expulsion of Kashmiri Pandits — and all other non-Muslims — is its clear objective.’

Dr Ajai Sahni, executive director, Institute of Conflict Management, has been closely documenting terrorist activity and its concomitant of security issues across the sub-continent for the last three decades.

Reacting to the recent terrorist murders of policemen in their homes — the most recent being early today, June 18, 2022 when Sub-Inspector Farooq Ahmad Mir was killed in his Pampore home — and civilians in their work places in the Kashmir Valley, Dr Sahni tells Rediff.com Senior Contributor Rashme Sehgal, “Terrorism is far from being ‘eliminated;’ a fraction of the Kashmiri migrants have been deceived into returning prematurely to the Valley and are now paying the price for this… it’s not just the killings that demonstrate the failure of the government’s Kashmir policy; there are a multiplicity of other indices that support this conclusion.”

Part one of a three-part interview:

The Hindu population in Kashmir insist they are once again victims of targeted killings. They feel extremely unsafe and want to leave the Valley immediately.

There is no doubt that there are targeted killings in the Valley, that Hindus and Kashmiri Pandits are selectively being killed.

There is a distinction between personal and national security.

In terms of personal security, there is no doubt that Hindus are at grave risk in the Valley and that is why I made it very clear that the government’s policy of trying to force Kashmir Pandits to return or remain in the Valley is wrong.

Some 2,105 Kashmiri Pandits had been provided jobs under various special schemes, and the government insists that they ‘have to return as they are government employees’ and the ‘administration cannot agree to the demands of them completely shifting out of Kashmir Valley.”

The objective is to try to push the partisan claim that the BJP government has fulfilled its promise to get the Pandits back into the Valley.

I have noted that this is a cynical calculus to demonstrate the ‘success’ of the Centre’s policies in ‘normalising’ the situation.

I do not see any significant incidence of the voluntary return of Kashmiri Pandits to the Valley — and rightly so, in view of the threat to their lives — consequently, we may safely conclude that the situation is far from normal.

My purpose in emphasising the declining long-term trends in violence is to reiterate that the hysterical claims that the situation is as bad as the 1990s are simply absurd and contrafactual.

Moreover, the problem in Kashmir, though it remains far from resolution, does not constitute a national security challenge of the magnitude that prevailed in the 1990s and the early 2000s.

The terrorists’ objective of maintaining the ethnic cleansing of the Valley is something that has been consistent from the 1980s to the present.

There is a constituency that has long claimed that the separatist movement in J&K is constructed on a secular ‘Kashmiriyat’ identity.

This is manifestly false, and has been so at every stage of the separatist movement in the state/UT.

Separatism and terrorism in J&K is and has always been an Islamist extremist venture, and the expulsion of the Kashmiri Pandits — and all other non-Muslims — is its clear objective.

As a result, Kashmiri Pandits will be at risk wherever these terrorists are able to maintain operational dominance. Ever since the revocation of Article 370 in J&K, the government had been claiming that the situation has normalised. But these killings show this is hardly the case.

I had made it very clear that the present ‘breakdown’ is the result of the false expectations that have been created by the false propaganda being spouted by both the government and the BJP.

Every single claim that the government had made to justify the revocation of Article 370 has failed.

The government’s principal arguments were that the revocation of Article 370 would ‘eliminate the threat of terror,’ would help bring the Kashmiri Pandits back to their homes in the Valley, remove various ‘roadblocks’to development, and bring in massive private investment.

None of this has happened.

Terrorism is far from being ‘eliminated;’ a fraction of the Kashmiri migrants have been deceived into returning prematurely to the Valley and are now paying the price for this; and, other than government projects, many of them sanctioned by the previous UPA government, there is no evidence of any significant inflow of private capital, despite some grand announcements.

So it’s not just the killings that demonstrate the failure of the government’s Kashmir policy; there are a multiplicity of other indices that support this conclusion.

Of course, there are some indices that may favour a more charitable view.

The massive influx of tourists and large numbers of pilgrims for the Amarnath Yatra may suggest ‘normalisation.’

It is useful to recall, however, that even at much higher levels of terrorism, the terrorists avoided targeting tourists who were the mainstay of the Valley economy and the Amarnath yatra was also usually allowed to go through in much worse times for the same reason — though there were five terrorist attacks on the pilgrims between 2000 and 2017. The Kashmiri Pandits are now clamouring to leave the Valley. Those who could afford to do so have flown out, others are making their way to Jammu by road.
Yet we are witness to how security forces have been pressed into action to prevent them from leaving their camps. Should they be made to stay on forcibly in this manner?

I have stated that this reflects the callousness and cynicism of the government, that is only interested in maintaining the symbolism of the presence of the Pandits in the Valley to support their claims of ‘normalisation,’ even at the cost of innocent lives.

This is not just a policy error, it is an act of inhumanity.