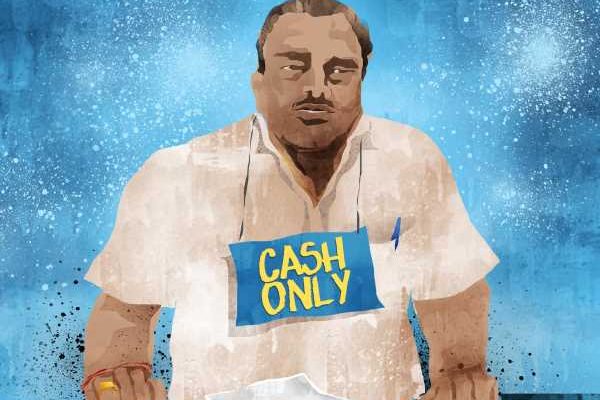 Five years after demonetisation, which sought to curb black money and reduce cash circulation in the economy, 70 per cent of respondents said they paid a large component of the total payment towards a real estate transaction in cash.
About 16 per cent said they paid over half the amount in cash, observes Shyamal Majumdar.

Time stands still at Lohar Chawl in the heart of south Mumbai, just about a km from the Chhatrapati Shivaji Terminus station.

The market, which is Mumbai’s epicentre for electrical goods, is home to hundreds of wholesale and retail shops on the ground floor of buildings whose expiry date is over long back.

None of this, however, seems to affect the shop owners, most of whom use glass doors to shut the noise outside and remain in air-conditioned comfort.

They are also united in their abiding faith in cash, and only cash.

Most of them are polite to a fault but the “animal” spirit comes into full display when you try to pay using credit/debit cards or mobile wallets.

“Go away” is the politest way that the buyer is shown the exit door.

The traders are, however, helpful enough to show you the direction to the bank ATMs so that you can pick up cash and settle their “bill”, which is on plain paper with no letter heads.

There are at least 20 overworked ATM machines within 100 metres, all of whom faithfully keep Lohar Chawl’s cash economy going.

The old-timers who know the Lohar Chawl ethos are obviously wiser, and come with loads of cash.

Asked how he is so fearless in taking cash and not giving bills, a trader with diamond-studded ear rings thoughtfully suggests that the question should be directed at officials who accept bribes even in offices that are equipped with functional CCTVs!

He needn’t worry anyway as the tax guys, it seems, have forgotten the existence of Lohar Chawl during their much-publicised crackdown on evaders.

If you thought Lohar Chawl, or the nearby Mangaldas or Crawford markets are exceptions, visit the newly opened IKEA store at Kamala Mills compound in Worli, south central Mumbai.

The store encourages buyers to pay digitally and has also introduced self-check-out for them.

But the queue for those wanting to pay cash for their hefty purchases is at least three times longer than the one for those using cards or wallets.

And we are not talking about India’s tier II or III towns where digital access is still limited.

The question is: If this is happening in the richest areas of the country’s commercial capital (Delhi and other metros can’t be far behind), what does it say about the moral compass of India’s citizens?

Nobody seems to care that the greater the tax evasion in an economy, the higher the walls for honest entrepreneurs, the lower the morality.

Five years after demonetisation, which sought to curb black money and reduce cash circulation in the economy, community platform LocalCircles did a survey where 70 per cent of respondents said they have paid a large component of the total payment towards a real estate transaction in cash.

About 16 per cent said they have paid over half the amount in cash.

Many people reported that even for many medium and small scale enterprises, property registration takes place at a fraction of the total value paid, to evade taxes.

This is partly the reason why even as digital payments are booming, cash is once again 14 per cent of the broad money circulating in the economy — the same as before demonetisation.

The examples of big markets like Lohar Chawl and others show why India slipped six places to 86th among 180 countries in the Transparency International’s latest Corruption Perception Index.

India also has the highest rate of bribery and use of personal links to access public services such as healthcare and education in Asia, according to another study titled Global Corruption Barometer – Asia.

It is well known that these indices do not reflect actual corruption level in any country, which means the reality is much worse.

This acceptance of and active participation in corruption by citizens has been costly.

Transparency International has estimated that a one-point increase of corruption on a scale from 10 to 0 lowers productivity by 4 per cent of GDP and decreases net annual capital inflow by 0.5 per cent of GDP.

While it is true that the big winners of evasion still remain those who use tax havens to evade paying taxes on their fortunes, it is no less true that those lower down the rung are also trying their best to dodge paying up.

Ask the crorepati traders in markets like Lohar Chawl, the likes of whom may have inspired then finance minister Arun Jaitley to say in one of his Budget speeches that ‘We are a largely tax non-compliant society.’ It’s obviously an understatement.