The bust came up days ago at 12 Janpath, now home to Paswan’s son Chirag, who stayed on in the bungalow despite being allotted 23, North Avenue, as Lok Sabha member from Jamui. 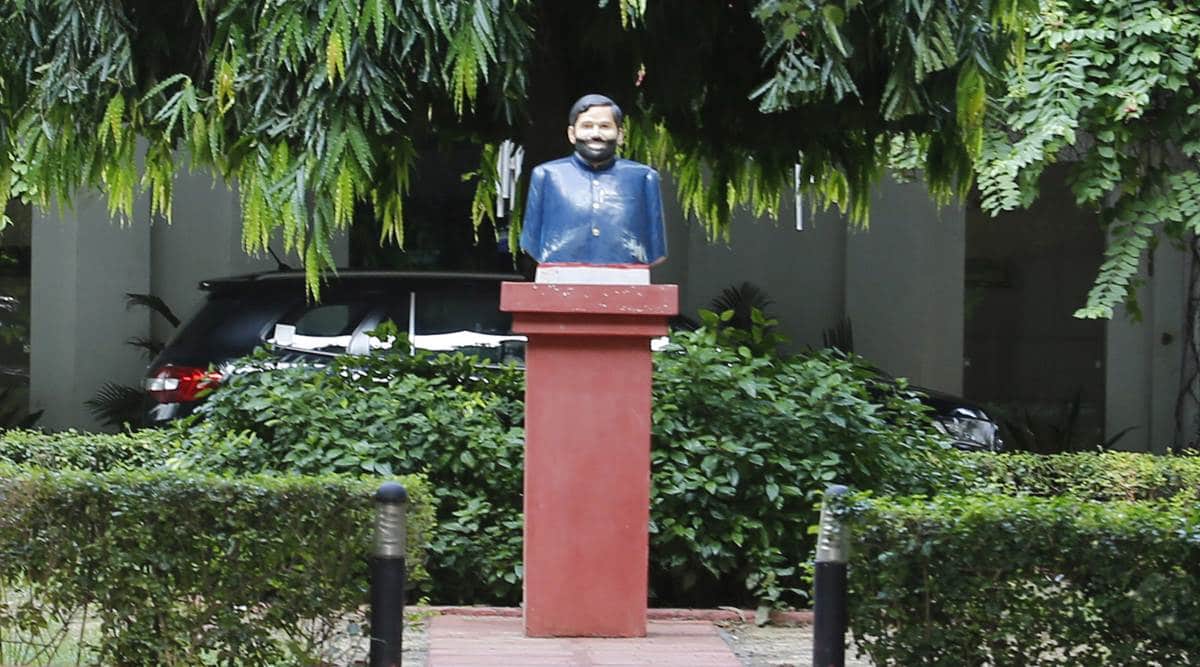 It’s a small bust — the late LJP leader Ram Vilas Paswan wearing his trademark bandhgala and smile. Yet, the statuette that greets visitors to 12, Janpath, where Paswan lived for over three decades with his family, has put the ruling BJP in a spot ahead of the Uttar Pradesh elections.

The bust came up days ago at 12 Janpath, now home to Paswan’s son Chirag, who stayed on in the bungalow despite being allotted 23, North Avenue, as Lok Sabha member from Jamui. After Paswan’s death in October 2020, the Urban Development Ministry’s Directorate of Estates served vacation notices to the Paswan family and recently allotted the bungalow to Railway and IT Minister Ashwani Vaishnaw.

While the family was supposed to have vacated the bungalow within a year of Paswan’s death, a deadline that runs out next month, sources close to Chirag said they have got an extension of a few more months.

Now, the installation of the bust may have complicated matters. The BJP leadership fears that Chirag could “politicise the issue” by refusing to move out. Given the considerable influence the late Paswan had among the Dalit community, the BJP knows it can ill-afford to antagonise his family at such a crucial juncture — the UP Assembly elections are months away, and the BJP hopes to consolidate non-Jatav Dalit votes in eastern UP. The party relies on Paswan community votes in a number of constituencies in central and eastern UP.

“The Paswan family is not in a mood to fight with the BJP on this issue. There could be a meeting of party leaders soon in which we will take a decision on the timing of the shifting,” said an LJP source, adding, “The top leadership of the BJP was in touch with the family.”

A section in the BJP also fears that Chirag, who had recently taken out a yatra to mobilise support for himself after the family-led infighting in his party, might make his exit from 12, Janpath difficult, hoping to draw sympathy from the community for his “political gains.”.

The BJP also worries that if the moving out turns ugly, other political parties in Bihar could join issue. Former chief minister and HAM leader Jitan Ram Majhi has already demanded that 12, Janpath be converted into a memorial for the late Dalit leader.

The Paswans have, however, always maintained friendly ties with the BJP. Even when the LJP walked out of the JD(U)-led alliance in Bihar, with Chirag using every opportunity to hit out at Chief Minister Nitish Kumar, the Jamui MP was cordial towards the BJP. Earlier this year, Ram Vilas Paswan with posthumously conferred with the Padma Bhushan.

The BJP government had faced similar pressure from the Rashtriya Lok Dal when its late leader Ajit Singh tried to convert 12, Tughlak Road into a memorial for his father, former prime minister Chaudhary Charan Singh, who lived there for several years. Singh had to vacate the house after the Urban Development Ministry disconnected power and water supply to the bungalow.

Neeraj Shekhar, son of former Prime Minister Chandra Shekhar, also tried to hold on to his father’s bungalow, 3, South Avenue, after his father’s death. But he was forced to vacate the house after the BJP-led NDA came into power in 2014.

Despite a Supreme Court order that no memorial can be set up in government accommodation, the UPA government in 2013 leased out 6, Krishna Menon Marg for the Babu Jagjivan Ram National Foundation.