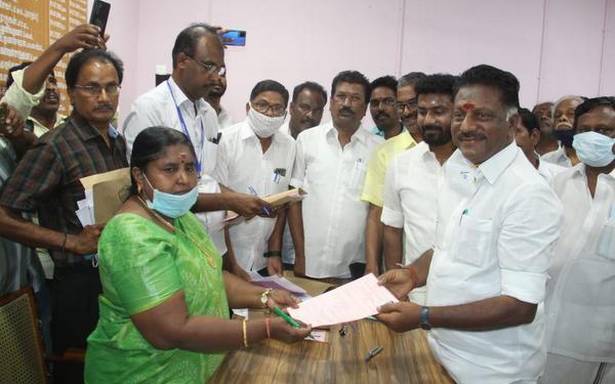 Mr. Panneerselvam, on Friday, filed nomination papers for the Bodinayakkanur Assembly constituency, where he will take on the DMK’s Thanga Tamilselvan

After filing nomination papers for the Bodinayakkanur Assembly constituency, where he will take on the DMK’s Thanga Tamilselvan, he told reporters that from 2011, the electorate had given him the opportunity to represent them in the Assembly with a resounding victory. The party and their allies will register a win in all the 234 segments and dedicate the victory to their late leader Jayalalithaa. The people would give the party a hands-down win, Mr Panneerselvam said.

The AIADMK had fulfilled its electoral promises made in 2016, the Deputy CM said. Be it in handling a flood situation or a cyclone, the State administration, under the leadership of Chief Minister Edappadi K. Palaniswami had done its best during the last four years, he said. In the case of COVID-19 management, Tamil Nadu stood on top in containing the pandemic and had also saved people from the clutches of death.

Above all, the people of Tamil Nadu were in safe hands and there were no issues with regard to the maintenance of law and order, he felt. In the coming years, the new government would focus more on growth and development, he said.

Accompanied by his MP son, O. P. Raveendranath and other functionaries, Mr. Panneerselvam filed his papers and took the mandatory pledge in front of the Returning Officer.

Cadres, who had assembled outside the Returning Officer’s office, hailed him as the heir of the AIADMK and their late leader Jayalalithaa.