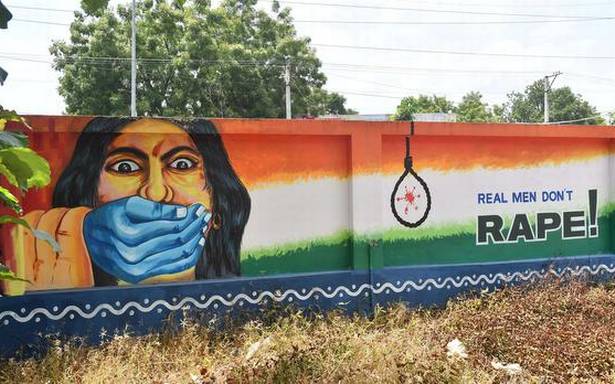 A vagabond allegedly sexually assaulted a two-and-a-half-year-old girl who lured her with the promise of buying chocolates in Nirmal district of North Telangana.

The offence took place on the evening of October 4 and came to light only on October 6 night when the girl noticed the suspect, Narayana, 50, in the area and informed her mother, who in turn alerted the neighbours and informed police, District Superintendent of Police Ch. Praveen Kumar said.

Anticipating that the incident could result in a law and order situation in the district, as both the victim and suspect belong to different faiths, a heavy police force was deployed in the already ‘communally sensitive’ town.

According to the complaint lodged by the girl’s mother, on October 4 when the two-year-old was playing with her friends in the area, she was lured away with the promise of chocolates by Narayana, who took her to a nearby secluded area where he forced himself on her.

As the girl started screaming, the suspect fled away fearing locals might gather on the spot, and the former found her way to the house as the place was in the same locality.

After reaching home, she complained of severe pain and narrated the whole incident to her mother. However, the mother did not reveal the offence to anyone until the girl noticed Narayana moving in the area on October 6 night and alerted the former.

The suspect was caught and roughed up by the family members and locals before he was handed over to the police.

Based on the complaint lodged by the girl’s mother, a case under relevant sections of the Indian Penal Code and the Protection of Children from Sexual Offences Act against Narayana who was arrested and remanded to judicial custody, the SP added. He was homeless and addicted to alcohol.