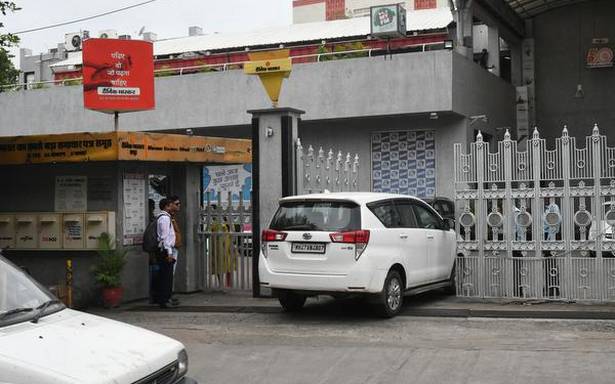 The Income Tax department launched extensive search operations and raids at multiple locations, including in Delhi, Madhya Pradesh, Rajasthan, Gujarat and Maharashtra. On the website of the Dainik Bhaskar, one of the largest circulating Hindi daily, the group has stated that “scared of its coverage of floating dead bodies in the river Ganges during the pandemic, the government launched raids on the Bhaskar group”.

A small group of 200 farmers reached Parliament Street to begin a Kisan Sansad protest, running parallel to the proceedings at Sansad Bhawan barely a kilometre away.

As papers were flung into the air, Ashwini Vaishnaw could not complete his statement and instead laid a copy of it on the table of the House.

The petition filed by Supreme Court advocate Manohar Lal Sharma asked “whether the Constitution allows the Prime Minister and his Minister to snoop on citizens of India for their vested political interest”.

Ladakh to get central university

If you know a child who was orphaned due to COVID-19, you can now share his or her details with the government on a web portal and help the child claim benefits under the PM CARES scheme announced earlier. The website can be accessed at www.pmcaresforchildren.in.

Given the robust and statute-based Death Registration System in India, while some cases could go undetected as per the principles of infectious disease and its management, missing out on the deaths is unlikely, said the Health Ministry in a release issued on Thursday while responding to allegations about “missing COVID deaths”.

Coronavirus | Prevalence of Delta variant among specimens sequenced over past 4 weeks exceeded 75%: WHO

The prevalence of the highly-transmissible Delta variant of COVID-19 among specimens sequenced over the past four weeks exceeded 75% in many countries worldwide, including India, China, Russia, Israel and the U.K., the WHO has said.

The Toxics Link study, ‘Quantitative analysis of Microplastics along River Ganga’, was based on an analysis of water samples at Haridwar, Kanpur and Varanasi. The highest concentration of such plastic was found at Varanasi, comprising single-use and secondary plastic products. The water testing was carried out in collaboration with the National Institute of Oceanography (NIO) in Goa.

G20 Environment Ministers meet in Italy amid floods and fires

Host Italy is hoping the Naples talks will help spur ambitious goals to be adopted at the COP26 conference in Glasgow, which organisers have said represents “the world’s last best chance to get runaway climate change under control”.

Andry Rajoelina was sworn in as president of the Indian Ocean island country in 2019 after a hard-fought election and a constitutional court challenge from his rival.

Chinese Foreign Ministry spokesman Zhao Lijian made the remarks while reacting to reports of an investigation by a global media consortium that showed Pegasus software from Israel-based NSO Group is being used to spy on journalists, human rights activists and political dissidents across the world.

“(The) Request for Proposal (RFP) along with draft Share Purchase Agreement (SPA) have been shared with QIBs (qualified interested bidders) by the transaction advisor on 30.03.2021 for submission of financial bids. The financial bids are likely to be received by 15.09.2021,” Minister of State for Civil Aviation, Gen. (retd.) V.K. Singh told the Lok Sabha.

Health experts have appealed to State governments and citizens to not lower their guard against COVID-19, saying a third wave was inevitable.

Minister of Sports Sanoussy Bantama Sow made the announcement in a letter on July 21 addressed to the president of the Guinean Olympic committee, blaming the virus and its variants.

India vs Sri Lanka, 3rd ODI | India’s conundrum whether to experiment or not after series win

With the series already in the bag, the team may rest ‘Kulcha’ and play the young guns, with Krunal as the third spinner.