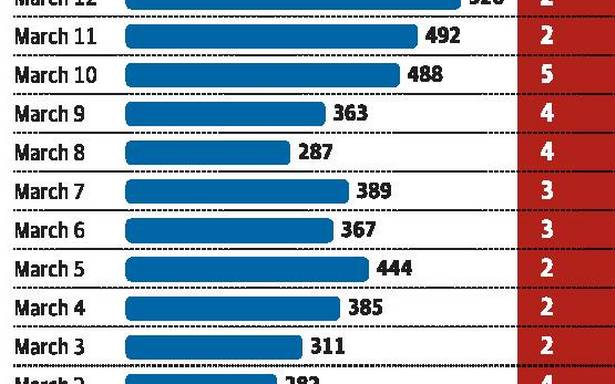 On March 1, Bengaluru Urban recorded 210 positive cases, but since then, cases have been rising steadily.

On Friday, the city recorded 526 new COVID-19 cases, the maximum since the start of the month. A worried Bruhat Bengaluru Mahanagara Palike (BBMP) has decided to step up testing and contact tracing.

Currently, civic officials are tracing an average of 4.5 contacts for every positive case reported in the city. Admitting that this was low, and that it had dropped over the past 10 days, BBMP’s Special Commissioner (Health) Rajendra Cholan stated that the efforts are being made to increase contact tracing.

In a virtual meeting with civic officials from all zones, civic chief N. Manjunath Prasad said a minimum of 15 contacts for every positive case reported should be traced and tested. To reduce delays in relay of information about positive cases to the ward/PHC level, there will be integration of ICMR’s portal through the index app till the UPHC level.

This, Mr. Cholan said, would be in place in the next two days. This way, action can be initiated with 24 hours of identification of positive cases at the PHC level.

At the meeting, the need to increase vaccination centres was also discussed. Currently, there are 341 vaccination centres in the city. Mr. Cholan said the civic body had identified around 500 hospitals that had more than 30-beds, registered under Karnataka Private Medical Establishments Act. Of these, 210 hospital managements had agreed to be included.

To ensure residents of slums and persons belonging to lower socio-economic groups are also covered in the COVID-19 vaccination drive, the PHCs (primary health centres) have been directed to identify beneficiaries through Auxiliary nurse midwives (ANM) and bring them to the vaccination centres.

“The ANMs should be instructed to create awareness among beneficiaries. If we don’t do this, these people will be left out,” said Mr. Cholan, adding that the BBMP should work towards achieving a target of administering 1 lakh vaccinations every day.