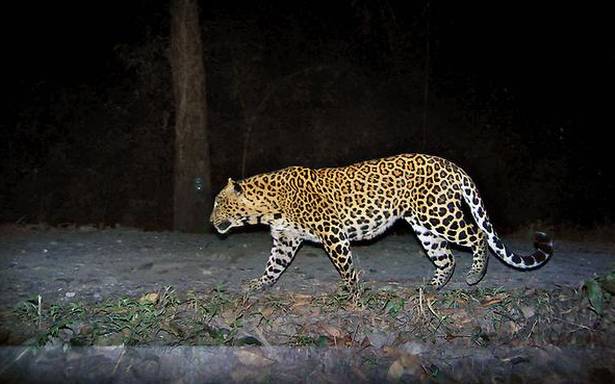 Good company on the road, runs a Chinese proverb, is the shortest route to a destination. However, as far as wildlife observation and study are concerned, I have found that having no company whatsoever is advisable.

Experience has taught me that one of the distinct advantages of going for a walk alone through Munnar’s tea fields is that one can spy upon wildlife unseen and unhindered — a favourite pastime of mine that has over the years proved to be quite educative nature-wise and enriched my knowledge of wildlife. When one has company, there’s inevitably chatter that makes the timider species of wildlife flee. And, more importantly, one’s concentration is seldom focussed.

One evening a few years back while sauntering solo through a tea field, I espied a leopard cat padding along softly on the grassy path some 50 feet below me. Hoping to get a closer view of it, on an impulse I went down on all fours and began to follow it stealthily. I soon found that it was after a Malabar Whistling Thrush foraging and hopping along well ahead of it. In fact, the feline was so intently stalking the bird that it didn’t realise it was itself being stalked!

Once, when it had crept close enough, the predator crouched low as if about to pounce, then changed its mind and froze rock-like, all the time keeping its gaze glued on its prey. Inching forward, I managed to get within about 20 feet of it, using the cover of the tea bushes flanking the sinuous path. Then an unseen dry twig snapped crisply under my knee. The leopard cat spun round, its feral eyes widening in seeming disbelief on finding me so close. Then in a split second it was gone, having leapt agilely into the protective cover of the tea bushes.

The leopard cat (‘Prionailurus bengalensis’) derives its name from its leopard-like colouring though it’s only a midget compared to its better-known lookalike. Indeed it’s more likely to pass for a leopard’s young cub. A forest and plantation-dweller, it’s found across India and Southeast Asia. It has a yellowish brown coat heavily marked with dark spots and streaks and measures from 45 to 75 cm in length excluding its 25-35 cm tail. It’s about the size of a domestic cat but is slenderer and has longer legs. Sharing a common trait with the tiger, it’s believed to use its scat and urine to mark its territory.

The leopard cat is basically a crepuscular and nocturnal hunter that’s also known to prey on domestic fowl which it finds far easier to kill than the elusive jungle fowl. This has led to its being regarded as a pest and killed by poultry farmers in retaliation.

An agile climber, the leopard cat is arboreal in its habits to a certain extent. It rests in trees (and sometimes hunts from them, stealthily ambushing unwary prey passing below) but also seeks shelter in dense thorny undergrowth on the ground. One evening I espied one ensconced in a silver oak tree in a tea field. It was apparently keeping track of jungle fowl feeding below among the tea bushes — I could hear the rustling sound created by the fowl ‘raking’ the ground for grubs with their feet. On seeing me, the feline froze, then clambered higher up the tree and concealed itself amidst the dense foliage. Having satisfied my curiosity and not wanting to be a hindrance to its dinner, I quietly moved on, taking care not to disturb the unsuspecting jungle fowl.

The leopard cat is, of course, carnivorous, living off a variety of small prey including mammals, lizards, amphibians and birds. Rats and mice form a major part of its diet. A skilled hunter, it dispatches its prey with a swift pounce and bite that more often than not immobilises it. Unlike the domestic cat, the leopard cat doesn’t ‘play’ or ‘toy’ with its prey; it pins it down with its claws until it’s dead. It is believed that this could be due to the relatively high proportion of birds in its diet, which are more likely to escape when released than are rodents.

The leopard cat is basically a crepuscular and nocturnal hunter that’s also known to prey on domestic fowl which it finds far easier to kill than the elusive jungle fowl. This has led to its being regarded as a pest and killed by poultry farmers in retaliation.

The leopard cat is known to breed in spring. The gestation period extends to about 60-70 days with a litter consisting of between 2 and 4 young that are usually born in a hollow tree trunk, rocky crevice or burrow. The feline has been known to breed and live up to 13 years in captivity.

I once came across the mangled pelt of a leopard cat in a British planter’s bungalow in Munnar. He had an intriguing story to tell. The feline had strayed into his garden and had been promptly chased and treed by his vigilant Labrador. Just when the intruder thought it was safely out of the dog’s reach, two tom-cats from a workers’ colony nearby zeroed in on it. A fierce and high-pitched brawl followed, leaving the leopard cat fatally mauled. Perhaps it could’ve successfully taken on one assailant, the planter opined, but two proved too much for it. Having witnessed the entire gory drama, he had retrieved the carcass and tried out his amateurish taxidermy skills on it.

Since the leopard cat is believed to be widely distributed across India and Southeast Asia, the IUCN has categorised its conservation status as being of ‘Least Concern’. However, progressive habitat loss and poaching do pose a threat to the feline in certain parts of India as well as other countries. Commercial trade in its fur and meat had taken a heavy toll of its population earlier, with mainly China and Japan having been involved. Commercial exploitation of its fur has been particularly heavy in China. Between 1955 and 1981, the average number of furs exported per year is believed to be as high as 1,50,000. China officially halted the export of leopard cat furs in 1993.

However, the leopard cat is still feared to be commercially exploited for its fur and flesh. The commercial fur trade sees Japan — the major consumer of its fur in Asia — import as many as 50,000 skins per year. And now a new dimension has been added to the leopard cat’s woes: its increasing popularity as a pet has apparently led to a clandestine but prospering pet trade (which relies largely on trapping) with suspected international ramifications. Further, in an attempt to produce a new strain of domestic pet, it is believed that experiments are being illegally undPPertaken to cross-breed the leopard cat with its domestic counterpart. Inevitably, in due course this will result in erosion of the former’s bloodline and distinct identity.

One can only hope that a cat’s fabled nine lives will save this cuddlesome and furry wild feline from being wiped out altogether. On a more realistic plane, however, we need to learn to value and cherish the rich (but fast dwindling) biodiversity that planet earth harbours — before it’s too late.