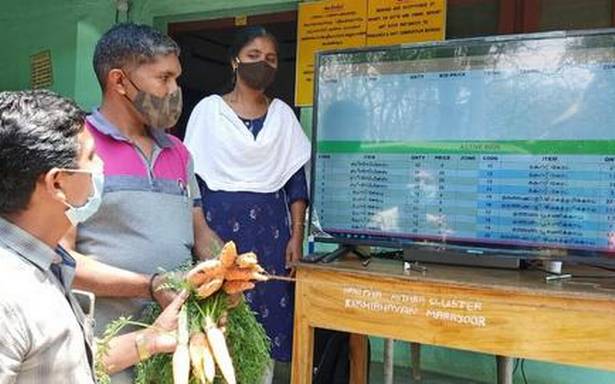 When the first wave of COVID-19 hit, the Chilla, an exclusive market for tribal produce under the Marayur Sandalwood Division had to be closed for long.

When it was reopened, again it had to be closed after the second wave hit affecting badly the livelihoods of tribespeople in the forest settlements of Marayur.

Now the authorities have made arrangements to market the tribal produce online.

A mobile app and an online auction system for Chilla was developed in association with United Nations Development Programme (UNDP). The mobile app based online version was started two weeks ago and it proved a success.

Marayur range officer M. G. Vinod Kumar said that the details of the produce are available through the mobile app.

In the trial version the facilitator adds the amount of the produce which the auctioneer quoted. A big screen in front of the auction centre at Marayur displays it. If another auctioneer quotes a higher price the facilitator will include it too. When the final amount quoted is displayed for three minutes on the screen the deal is fixed, he said. If the price quoted is not remunerative, the farmer can withdraw his produce, he added.

“In future we will start Chilla retail market and the people can buy the exclusive forest produce online. We will deliver the product through Kerala State Road Transport Corporation(KSRTC) courier service to anywhere in the State,” he said. The payment can also be done online.

Every crisis is an opportunity and the new platform helps in reducing the cost. Marayur Sandalwood Division had earlier turned to e-auction for sandalwood. It was found more effective and auctioneers from far away places also participated in it.

Chilla market has a currently a turnover of over ₹3 crore.