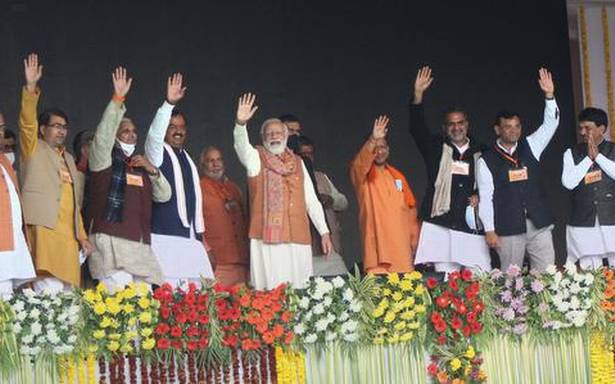 A day after it was revealed that Uttar Pradesh Chief Minister Yogi Adityanath was amenable to contesting for an MLA seat in the Assembly poll due early this year in the State, BJP Rajya Sabha MP Harnath Singh Yadav has requested that he fight from Braj in the western part of the State.

Mr. Yadav, who also hails from the area, has written to BJP national president J.P. Nadda in this regard.

Speaking to The Hindu, the MP said he was a “madhyastha” interceding between “Bhagwan Krishna” and Mr. Nadda.

“Both Bhagwan Krishna and Yogiji appeared together in my dreams and the next day itself I despatched the letter,” he said.

Braj and the adjoining areas of Mathura and Vrindavan are considered important pilgrimage spots for those worshipping Lord Krishna. Significantly, Mathura is also where the Sangh Parivar is ratcheting up demands for a temple again at a spot where a mosque exists.

When asked whether the farmers’ movement and the resentment against the BJP among farmer groups may make Mathura or anywhere in western Uttar Pradesh a risky proposition for the Chief Minister to contest, Mr. Yadav denied the possibility.

“Yogiji’s government has done a lot of work, including in terms of law and order; he will win from this area for sure,” he said.

“Kisan ab shaant mann se aankalan karengey [farmers will now assess the situation with a calmer mind],” he said referring to the three controversial farm laws that led to year-long protests, resulting in their subsequent repeal.

The choice is also interesting in that Mr. Adityanath himself has said he is willing to fight from any seat, “whether Gorakhpur, Kashi or Mathura” as directed by the party high command.