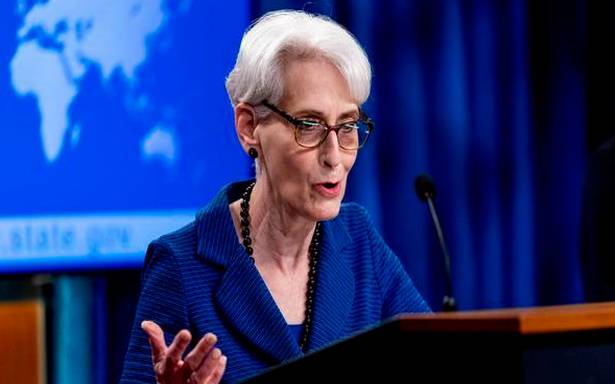 U.S. Deputy Secretary of State Wendy Sherman will visit India on October 6 for a series of bilateral meetings and civil society events, the State Department has announced. She will also participate in the India Ideas Summit organised by the U.S. India Business Council.

Ms. Sherman, America’s second highest ranking diplomat, is scheduled to visit Mumbai on October 7 where she will hold meetings with the business community and civil society . Her visit comes days after Prime Minister Modi’s visit to the U.S.

She will then fly to Pakistan to meet officials in Islamabad, the State Department said. Ms. Sherman is the second highest ranking American diplomat and the highest State Department official to visit Pakistan in the Biden presidency.

Secretary of State Antony Blinken told U.S. lawmakers weeks ago that Washington would need to re-assess its relationship with Islamabad. Last week, Mr. Blinken met his Pakistani counterpart Shah Mahmood Qureshi to discuss Afghanistan — specifically, coordinating diplomatic engagement and facilitating the departure of those who wanted to leave Afghanistan, the State Department said.

“The Secretary noted that the U.S. appreciates Pakistan’s support and assistance with both these efforts,” it had said.

Mr. Biden has however not yet spoken with Pakistan Prime Minister Imran Khan since the beginning of his presidency.