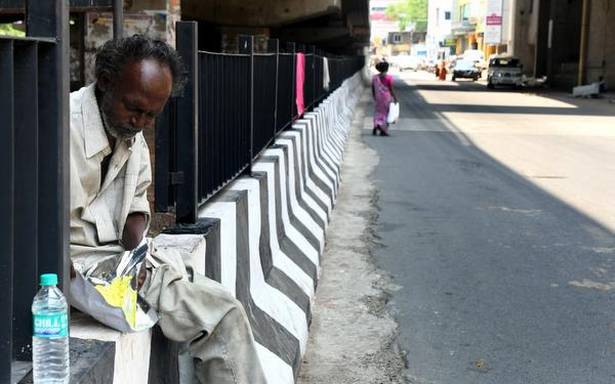 Upon hearing of the recent COVID-19 financial assistance announcement by Chief Minister M. K. Stalin, 21-year-old Sonia, a resident of Ratan Bazaar in North Chennai, became anxious. She has neither a ration card nor is she covered under the Chief Minister’s Comprehensive Medical Insurance Scheme to access these benefits. She feels her family will be left in the lurch as there will not be any income during the lockdown.

Activists in the city have requested Chief Minister M. K. Stalin to reach out to vulnerable sections of the society including urban homeless and some transgender people in the city and other parts of the State, who do not have access to State benefit measures.

Mr. Stalin has ordered the implementation of financial assistance of ₹4,000 to each of the 2.07 crore rice ration card holders across the State, in view of the hardships they are facing due to the COVID-19 pandemic. He also ordered the extension of the insurance cover for availing of treatment for novel coronavirus in private hospitals too, for beneficiaries of the Chief Minister’s Comprehensive Health Insurance Scheme.

“I got married two years ago and I live on the street. Though my parents have ration cards, I do not have one. It would be helpful if the government reaches out to people like us too,” said Ms. Sonia.

to a 2018 Chennai Corporation Survey, there are 3,742 households (units comprising both individuals and families are households) with a total of 9,087 homeless people who are living under the open sky. Around 48% of homeless families in the city do not have ration cards and 83% of the homeless households do not have access to medical insurance. More than 44% of the urban homeless have been residing in the streets for over 30 years. “I have a ration card, but others who live on the pavements do not have such documents. Due to this they could not get the financial assistance last year,” said Lakshmi, another resident of Ratan Bazaar.

Vanessa Peter, member, State-Level Monitoring Committee constituted by the Supreme Court of India to monitor the Shelter for Urban Homeless Scheme in Tamil Nadu, said: “The vulnerability of those in homeless situations will increase because of non access to ration cards as their livelihoods will be affected by the lockdown. The government, through the Shelter for Urban Homeless Scheme, should ensure access to relief and healthcare.”

Jeeva Rangaraj, founder, Transgender Rights Association, said that many transgender persons do not have ration cards now. “We are in the process of getting it for many. It would be helpful if the relief is given to registered members of the Transgender Welfare Board,” she said.