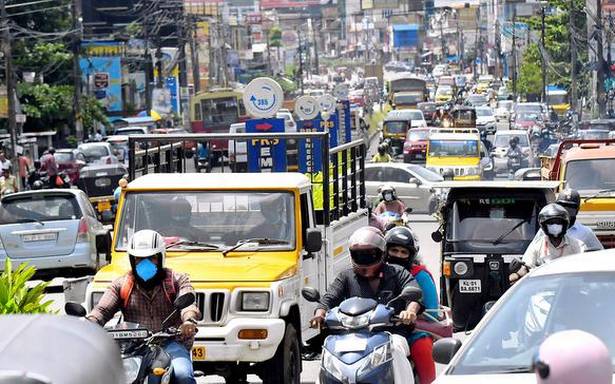 The State government’s decision to enforce complete lockdown on weekends has evoked mixed response with some stakeholders criticising it to be even counterproductive.

Unusual rush was experienced on Friday with people hitting the roads in large numbers ahead of the weekend shutdown.

"Even otherwise, most shops other than those dealing in essential items are allowed only on alternative days leading to rush when they are open. Even heavier rush is felt on Fridays because of the weekend lockdown," said P. A. Sageer, president, Broadway Shop Owners Association.

P. A. Paul, who runs a books and stationary shop in the city, said that the arrangement was counterproductive. "Allowing us to work round-the-week is much better since customers packed into three days will be spread across the week, which will reduce the crowding," he said.

However, the banking industry found the existing arrangement ideal. While normal banking hours have been restored, customers are not allowed in banks on Tuesdays and Thursdays.

Kerala Merchant Chamber of Commerce felt that with the test positivity rate yet to go down below 8 and gradual rise in the number of active cases being reported, restrictions may have to continue.

"Opening up round-the-week will definitely reduce the crowd felt on weekdays. But in the prevailing situation we can hardly demand that. Besides, we have noted that the rush on roads is not getting converted into business. So, we have asked our State coordinators to study that phenomenon," said G. Karthikeyan, president of the organisation.

The private bus industry, already reeling under two lockdowns and 50% occupancy even on weekdays, had a rather sarcastic take on the weekend lockdowns.

"We are just about meeting the operational expenses even otherwise. So, a government-enforced holiday keeping buses off the roads is a better option for us," said M. B. Satyan, president, All Kerala Private Bus Operators Federation.