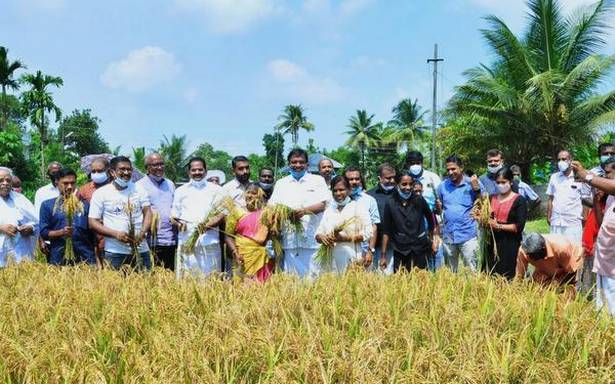 The COVID-19 restrictions had turned many professionals into farmers. From school teachers to home-makers, all have taken up cultivating vegetables and fruits, rice, and fish over the past more than 12 months.

One such group is a set of lawyers, under the aegis of All India Lawyers’ Union, Ernakulam district committee, who have come out with flying colours in an attempt to cultivate paddy in 5.5 acres in Kadungalloor panchayat in Ernakulam.

P.R. Ragesh, member of the district committee of the union, said more than 50 members, enthusiastic about farming, contributed ₹2,000 each to see through the initial expenses of the cultivation.

The plot was taken up with the help of the local paddy collective (Paadashekhara Samiti), which extended all help. Mr. Ragesh said there was no hesitancy on the part of the lawyers’ collective, who wanted to do something positive during the pandemic times. The experiment has been a great success, said M.P. Udayan of Mundakkali Paadashekharam (polder) at Kadungalloor, who looks after the day-to-day affairs of the paddy cultivation.

He said the harvest fest was organised recently.

The Uma variety of seed was selected for the project, and Mr. Udayan feels that around six tonnes of paddy could be obtained from the fields, now waiting to be harvested. Efforts are on to extend paddy cultivation to the new season, he said. Kadungalloor has a large extent of paddy fields, and cultivation can easily be extended, he added.