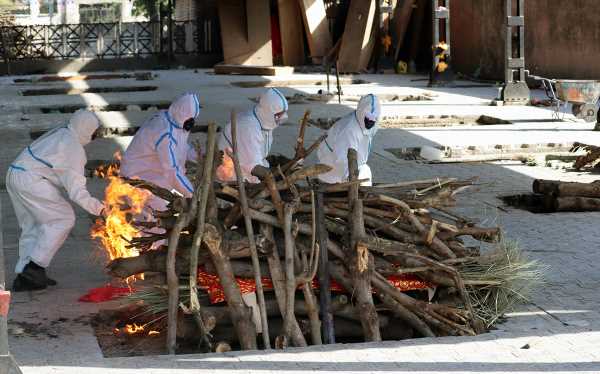 Since the nation is now paying the price of foolhardy behaviour in terms of the long queues at the crematoriums and graveyards, the anxiety of the RSS is natural, especially if the BJP’s main support base of the middle class turns away from it, observes Amulya Ganguli.

Significantly, the first reaction of the new RSS general secretary, Dattatreya Hosabale, to the rampaging Covid crisis is to warn his fellow countrymen against the anti-national elements who might create an atmosphere of ‘negativity’ and ‘mistrust’.

While offering condolences to the bereaved, he has lauded the government’s efforts to remedy the situation in a country of India’s size where problems can take ‘gigantic proportions’.

He seems less bothered about the proliferation of 243 cases per minute than about the impact it may have on the BJP’s political fortune, especially when the anti-nationals are supposed to be on the prowl.

It is understandable that the BJP’s longstanding friend, philosopher and guide — the RSS — should want to shield the government from any adverse criticism.

But by focussing almost entirely on the possible machinations of the ‘destructive and anti-Bharat forces’, the RSS No 2 has only highlighted the BJP’s as well as the RSS’s primary concern, which is the government’s political future in the time of a pandemic.

It goes without saying that the present crisis is the worst which the BJP and the government have ever faced.

In comparison, the censure which they attracted after demonetisation and the suffering of the migrant labourers in the post-lockdown period last year is minuscule.

As the removal of more than 100 anti-BJP tweets, presumably at the government’s behest, shows, there is a groundswell of anger not only over the government’s inability to deal with the situation,, but also over the belief that it was blind to the possibility of a second wave hitting the nation.

Instead, the BJP was so preoccupied with winning elections that it arranged massive rallies in West Bengal, ignoring the likelihood of these acting as ‘super-spreaders’ to carry the virus far and wide. Apart from elections, the BJP was also keen to win the hearts and minds of the Hindus, its key constituency, by allowing the Kumbh Mela congregations on the banks of the Ganga.

Since the nation is now paying the price of such foolhardy behaviour in terms of the long queues at the crematoriums and graveyards, the anxiety of the RSS is natural, especially if the BJP’s main support base of the middle class turns away from it.

For the RSS, such a turn of events will be the unkindest cut of all since it must have believed to be on the verge of a famous victory in West Bengal.

Hence, the raising of the familiar bogey of the ubiquitous anti-national lurking in the shadows who is ever ready to undermine the patriotic cause. On Hosabale’s elevation as the No 2 in the RSS hierarchy, he was projected as a ‘modern’ person who will be able to connect with the youth.

But considering that he began his innings with an endorsement of ‘love jihad’, he is clearly very much a chip of the old block who will persist with the RSS’s pro-Hindu line which is in sync with the BJP’s majoritarian outlook.

In case, however, the BJP finds itself in political deep waters, when its administrative ineptitude and lack of foresight are on display, the RSS will have no option but to come to the rescue of its political wing.

However, its tactics, judging from Hosabale’s initiative, depict the same stale dependence on the fanning of nationalistic fervour.

It’s uncertain, however, whether this will work.

The BJP has played this card, along with the stoking of communalism, too often to impress anyone any more outside the charmed saffron circle.

As a fallback option, it has lost its zing, especially when Narendra Damodardas Modi’s projection as God’s gift to the nation, as Vice-President Muppavarap Venkaiah Naidu said, is becoming a subject of derision in view of the near-collapse of the medical infrastructure.

When an authoritarian regime becomes the butt of jokes even in the midst of considerable misery, it is perceived to be in trouble.

From this aspect, Hosabale has read the signs right.

Amulya Ganguli is a writer on current affairs.