Indian scientists on a South African vessel are in Antarctica, midway through an expedition across the Southern Ocean. What are they studying, what are its implications for world climate and Indian monsoon? 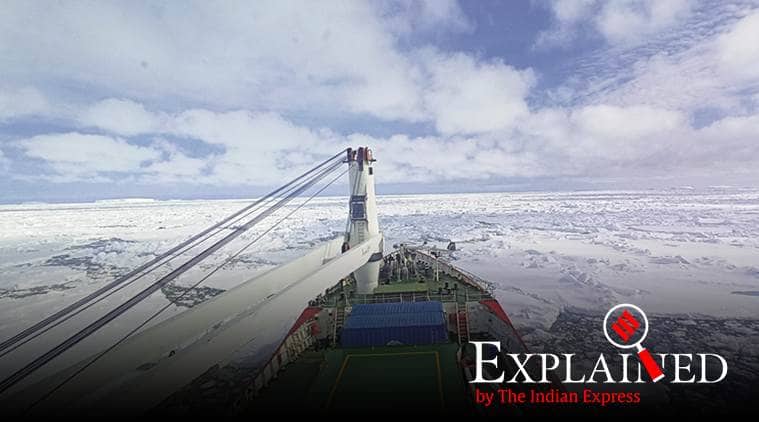 At noon on January 11, the South African oceanographic research vessel SA Agulhas set off from Port Louise in Mauritius, on a two-month Indian Scientific Expedition to the Southern Ocean 2020. As of Friday, the vessel was at Prydz Bay, in the coastal waters of “Bharati”, India’s third station in Antarctica.

On board the vessel are 34 scientific staff from India, apart from technical hands, seamen and a chef who are all from South Africa. This is the 11th expedition of an Indian mission to the Southern Ocean, or Antarctic Ocean. The first mission took place between January and March 2004.

The 18-institution team, led by Dr Anoop Mahajan from the Indian Institute of Tropical Meteorology, Pune, are collecting air and water samples from around 60 stations along the cruise track. These will give valuable information on the state of the ocean and atmosphere in this remote environment and will help to understand its impacts on the climate, according to a statement from the National Centre for Polar and Ocean Research (NCOPR) in Goa, which works under the Ministry of Earth Sciences.

A key objective of the mission is to quantify changes that are occurring and the impact of these changes on large-scale weather phenomenon, like the Indian monsoon, through tele-connection, the researchers said. “Our study mainly aims to understand the influence of the Southern Ocean across eco-system and atmospheric changes and how it affects the tropical climate and weather conditions,” said Southern Ocean Research Programme head Anil Kumar at NCPOR.

“We know that carbon dioxide is getting emitted into the atmosphere, and through atmospheric circulation goes to the Antarctic and polar regions. Since the temperature is very low there, these gases are getting absorbed and converted into dissolved inorganic carbon or organic carbon, and through water masses and circulation it is coming back to tropical regions. Since it is warmer in these areas, it re-enters the atmosphere,” Kumar said.

It is this cycle that the mission will help understand better. “How much carbon dioxide is going to those regions, and how much is coming back. That is the main objective.” Mahajan, who is on his third expedition, said: “All oceans around the world are connected through the Southern Ocean, which acts as a transport agent for things like heat across all these oceans. The conveyor belt that circulates heat around the world is connected through the Southern Ocean and can have a large impact on how climate is going to change due to anthropogenic forces,” he said.

Mahajan and his team have been able to share details of their journey through Twitter, thanks to satellite communication. “This is the first time we have constant Internet on the ship through satellite communication. This not only allows us to keep in touch with family but share the details of our research by posting updates every day, so people are aware of where their taxpayer money is going,” he said.

“We have 4-5 core priorities this time and we are broadening our understanding of how the climate system works through the oceans. In the last few years, we have data to show that the Southern Ocean is not an isolated environment but what happens there can affect the other end of the world,” he said.

There are six core projects:

Study hydrodynamics and biogeochemistry of the Indian Ocean sector of the Southern Ocean; involves sampling sea water at different depths. This will help understand the formation of Antarctic bottom water.

Observations of trace gases in the atmosphere, such as halogens and dimethyl sulphur from the ocean to the atmosphere. Will help improve parameterisations that are used in global models.

Study of organisms called coccolithophores that have existed in the oceans for several million years; their concentrations in sediments will create a picture of past climate.

Study the Southern Ocean’s impact on Indian monsoons. Look for signs in sediment core taken from the bottom of the ocean.

Dynamics of the food web in the Southern Ocean; important for safeguarding catch and planning sustainable fishing.

This week, the mission has extracted one of the largest sediment cores from the Southern Ocean measuring 3.4 metres. “The sediment core can help us understand the past climate, and aid in understanding how the climate is going to change in the future,” said paleoceanographer Manish Tiwari at NCPOR, who is heading this part of the mission. Over the years, as changes have occurred in the climate and the ocean, it can be observed from sediments that have settled over thousands of years. “We have a sediment core of 3-3.5 metres,” said Tiwari, whose estimate is that the sediment collected on board can stretch back to 30,000 to a million years.

Tiwari is currently in Goa. He said that when the samples collected by his colleagues are on shore, the first thing will be to establish the chronology. “We will have to get it dated, using radio carbon dating, the time limit of which is 40,000 years… we have to see how far back we go,” he said.

Observations can be continuous through automated instruments or by people taking turns, or they can be from stations at which different teams locate themselves at 5 am for a 12-hour work day, Mahajan said. “We essentially work at the station, where it is chaotic busy, and everyone completing sampling and analysis. It is when we are moving to the next station we get to relax a little while,” he said.

The crew celebrates birthdays and Republic Day, and even sings on board. On Thursday night, eve of Valentine’s Day, a notice went up seeking volunteers for a secret Valentine game.