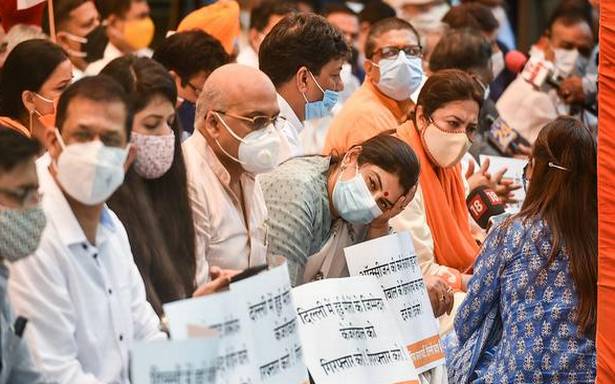 The BJP president on Monday staged a protest at Jantar Mantar here demanding that Chief Minister Arvind Kejriwal and his Cabinet colleagues be booked for “creating” an oxygen shortage during the second wave of COVID-19 infection which led to the loss of thousands of lives.

Delhi BJP president Adesh Gupta declared that the BJP would continue to stage demonstrations and protests till a criminal case in this regard was registered against Delhi government Ministers and till such time that Mr. Kejriwal was arrested.

“Despite getting prior warnings from the Centre about a possible second wave, the Chief Minister did nothing to deal with the oxygen shortage. He and his Ministers tried to create an atmosphere of panic and tried to pin the blame on the Centre for the worsening situation that followed,” Mr. Gupta alleged.

“Delhi is the only State where during the second COVID wave, the entire healthcare system was crumbling with shortage of essential medicines, injections and vital oxygen. And the irony is despite all this, Kejriwal was still claiming about Delhi having world-class health facilities,” Leader of the Opposition in the Delhi Assembly Ramvir Singh Bidhuri alleged.

Former Delhi BJP president Manoj Tiwari alleged that during the nationwide pandemic the Delhi government was perhaps the only government whose head was “busy aggravating the situation” rather than trying to solve it.