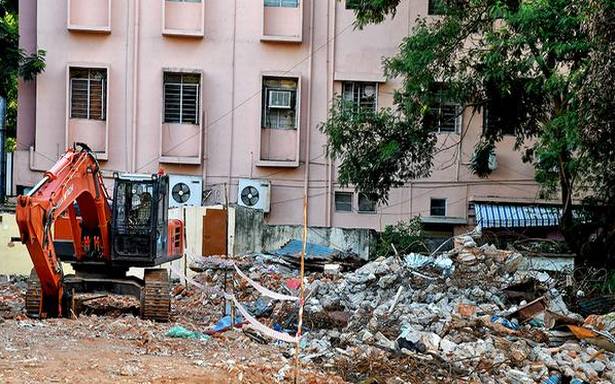 A portion of YMCA premises is being used for the project

For patients going to the Government Royapettah Hospital or shoppers heading to the Express Avenue, it may become simpler as an underground Chennai Metro Rail station is coming up here as part of the phase II project. The station will come up just in front of the Young Men’s Christian Association (YMCA) building.

According to officials of Chennai Metro Rail Ltd. (CMRL), the building has been demolished and they have taken over a portion of the land on this premises for building the station. “In this space, we will construct the entry/exit structure, lifts and escalators and ventilation shaft. We will need 654 sq. m. of this, we will permanently use 239 sq. m. for these facilities and the remaining 415 sq. m. will be returned to YMCA once we complete the construction. The 415 sq. m. will be needed for keeping construction material and carrying out the work,” an official said.

This station is part of the Madhavaram-SIPCOT stretch. Once completed, it will ensure a smooth travel for commuters shuttling between northern and southern parts of the city and avoid traffic congestion.

Asir Pandian, general secretary of YMCA Madras, said only a part of the land had been taken over and the other activities on the premises such as cricket, tennis and archery were continued as usual as CMRL had not made the entire premises out of bounds for the public.

“An old building and guest rooms were pulled down because we wanted to carry out development work too and we thought this would be the right time. We are glad a station is coming up here as many can easily travel to YMCA in future,” he said.

But sources said since the road was narrow, the CMRL has to meticulously plan and execute construction and traffic planning in such a way that unnecessary snarls were not caused, and access to the hospital remained clear as several ambulances used the road every day.

Barricades have been stacked on the site and in a few weeks, construction of a diaphragm wall, a box-like structure raised before tunnelling work, will be taken up.