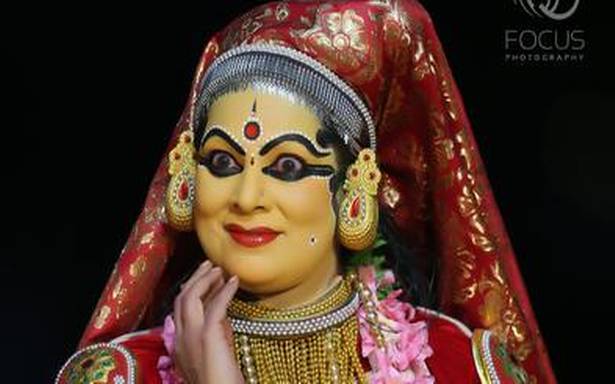 Kathakali actors Renjini Suresh and Dr. Haripriya Namboodiri sound jubilant. The cause they have been championing for long has met with success. The Kerala Kalamandalam Deemed University of Art and Culture has opened its doors to women, and will be given admission to the Kathakali acting course from this academic year.

Renjini perhaps sums up the feelings of all female actors when she says, “Women so far did not have the benefit of an institutional training ground or kalari. What we have achieved as artistes is due to our persistence and hard work along with balancing our education and career. I welcome Kalamandalam’s historic move, however late it has come.”

The impact of the decision is evident from the fact that of the 12 students admitted to the eighth standard Kathakali acting course for the year 2021-22, only three are boys. Six girls and a boy have sought admission to the Vadakkan or Kalluvazhi style and three girls and two boys to the Thekkan or Kaplingadan department. The courses lead up to MA in ten years.

Kalamandalam Ravikumar, head of Kaplingadan, says the matter has been debated for several years. “I am happy about this decision. But measures must be taken to ensure girls get all opportunities to realise their full potential.”

Women have been knocking on the doors of the 90-year-old Kalamandalam for several years. There are historical reasons behind why Kathakali came to be accepted as an art form dominated by males. It is believed the artistes who were inducted hailed from the warrior Nair clan and their physical training was modelled on the martial art form of Kalaripayattu.

Another reason cited for keeping women out was that the severe massage regimen in Kathakali kalari, known as uzhichil, was not suitable for women. But Haripriya points to the deft moves in Odissi as an example of what a female dancer can do without the rigorous uzhichil. The increasing number of women performers today do not undergo the massage routine. In fact, some medical experts have termed the massage as too harsh and unhealthy.

Says Haripriya: “Only when I started research for my Ph.D from Kalamandalam did I realise that there have always been women performing Kathakali, albeit in small numbers. The book Kathakalirangam by K.P.S. Menon, published in 1957, mentions several women associated with Kathakali schools or kalaris that were run by landlords or royalty. Many of them may have dropped out after marriage.”

Haripriya believes it was the institutionalisation of Kathakali training, with the setting up of Kalamandalam in 1930, that entrenched the notion that Kathakali is a male-only art form. P.S.V. Natyasangham at Kottakkal, another prominent Kathakali school, does not enrol women either. Haripriya’s topic for Ph.D was ‘Sthreethwam in Kathakali’ and she argued that female roles must be performed by women. During her doctoral thesis defence, and at several other fora, she faced stiff opposition from artistes as well as viewers.

What’s commendable is that the ban on women in Kathakali institutions did not stop them from learning privately. Women have been a regular presence in school and college festivals. Perhaps the first organised women’s group was the Ladies Troupe of Tripoonithura Kathakali Kendram that started in 1975. “A few years later, when Haripriya and I chose this as our profession, we could match the men, thanks to our gurus and many male Kathakali actors who accepted and encouraged us,” says Renjini. She said they also took courage from senior professional artistes such as the late Chavara Parukutty, who had to fight hard to establish herself.

Despite all the success on the stage in recent years, Haripriya says the label of amateurs stuck, since they did not have the institutional “kalari” experience. Though many viewers have started accepting and respecting women actors, it’s a much harder struggle for women to stay the course, compared to men, she adds.

Haripriya says women have nothing left to prove. “Renjini, and young actors such as Arya Parappur, Induja Cheruliyil and others have performed the most physically demanding characters such as Parasurama in Sitaswayamvaram, Ravana in Ravanolbhavam, and Arjuna in Kalakeyavadham. They have perfected the highly structured body language of Kathakali to such an extent that it is often hard to tell them apart from men.”

Renjini hopes Kalamandalam will modify its training curriculum to address the specific needs of the female body, and help them build up the necessary stamina. “That will help women actors of the future to scale greater heights.”

Ravikumar, head of the Thekkan kalari, says that over the years women have revealed their prowess on the Kathakali stage. He points out that admission to the kalari is just the beginning of the journey. Only regular stage appearances will give a student the necessary experience, from mixing make up, painting one’s own face to helping others don the elaborate costume.

As Haripriya says, what is important is eliminating gender bias and ensuring the freedom to make one’s own choice. “Who knows, maybe women will add a new dimension to Kathakali in the years to come.”

The author, a retired journalist, writes on