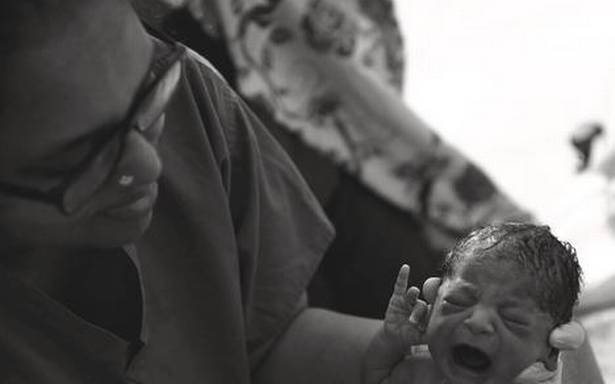 There are no second takes, no flash, no props, no make up, nor stylist. “And there is absolutely no posing,” says Rachel Koshy. “What you get are a few moments of unadulterated truth”.

Kochi-based artist and birth photographer Rachel has been documenting natural births for the past five years. Sometimes the pictures are not pretty, says Rachel, but they capture emotion in its rawest form.

When Rachel had her second baby at her home, in a natural birth setting, she was amazed by the support she had through the entire process. “I wasn’t abandoned on a table, left to wonder what would become of me. There were people around me every step of the way. That was the picture I had always had in my mind. I wished that I could freeze those moments,” says Rachel. That was a starting point of her interest in birth photography.

“Many of us have no documentation of our children’s births. We don’t remember what we looked like or what our baby looked like in his or her first moments of life. It is an intimate experience, which, I felt, needs to be documented,” she adds.

Few hospitals in India allow photography, so Rachel discussed the idea with Priyanka Idicula, the director of Birth Village, a natural birthing centre in Kochi and decided to go ahead with it. The job was as daunting as it was exciting. “I didn’t know what to expect,” she recalls about her first assignment. “My client was a French woman and I offered to do the shots for free. It was one of the most intense, yet most amazing things I had witnessed. It just made me realise just how strong women are.”

Soon, Rachel realised she would be treading the thin line between intrusion into privacy and fine art. She learnt her way around being discreet, literally lurking in the shadows and timing her shots to capture the best moments. “I know I am in a very private space. The mother is at her most vulnerable and I have the responsibility to not make her feel violated in any way.”

At natural birthing centres, mothers are allowed to dress the way they want and most of them wear minimal to no clothing during birthing. Rachel tells her clients that she would be present throughout. Not every client is body-confident; some mothers are shy. “I have the advantage of being a woman. But I sometimes tell them they could wear a sheer dress if they so wish. At any point during labour, if they don’t want me in the room, I tell them to let me know,” says Rachel.

She often has to click in awkward angles, in low light to capture a few fleeting moments. She also ends up as a nurse sometimes, running small errands — helping the mother tie her hair up, for instance.

Rachel’s creative process is political in that it breaks taboos around birthing. “As a society, we take birthing for granted. We don’t discuss it, let alone photograph it. Now, however, there is greater awareness and many young mothers want their births to be recorded.” When she started out, the only clients who showed interest were foreign nationals or those who had lived outside the country. Today, a majority of her clients are from south India.

Birth photography isn’t just about the arrival of the baby. Rachel sees it as a mother’s journey. Her frames depict the fragility and strength of a woman in equal parts — the exhaustion, the pain, a smile, an intimate moment with the spouse, joy and vulnerability. “I don’t promise my clients anything. I tell them there are no guarantees. I do not edit or touch up the pictures.” Rachel is unflustered by blood or body fluids, but she generally avoids frontal shots, photographing from the side and the back, so that the moment is recorded, but aesthetically.

Discounting a few days of basic training in manual photography she got from a retired college headmaster during her undergraduate days in Kochi, Rachel is largely self-taught. “I had a Yashica, my first camera, which I played around with. I had no technical expertise, but I wanted to tell stories. Even at home, I would assemble the photos of my parents, trying to make a narrative through the pictures.” Rachel went on to do her post graduation in advertising and journalism in Manipal, but her heart was in photography.

The feedback she gets from her clients is overwhelming, Rachel says. Some of them get back even after a year, thanking her. Though most hospitals have a ban on photography, Rachel says she would love to document a C-section. She also plans to spend more time doing post-partum photography.

“For me, the photos are really about reminding a woman of her strength,” says Rachel.