The confirmation that came from the Para Taekwondo Association India (PTAI) was a big booster for Naresh, who works as a driver with a chemical factory to support his three children, including Aruna. After Aruna Singh Tanwar (21), a para taekwondo player from Haryana, got official confirmation Wednesday of getting the bipartite quota for the Tokyo Paralympics to be held later this year from August 24 to September 5, the 2019 World Para Taekwondo Championship bronze medal winner spent rest of the day eagerly waiting for her father, Naresh Kumar, to return home in village Dinod near Bhiwani.

The confirmation that came from the Para Taekwondo Association India (PTAI) was a big booster for Naresh, who works as a driver with a chemical factory to support his three children, including Aruna. The family has been struggling financially, but the fact that his daughter will be the first paralympic taekwondo player from India to compete in Tokyo made Kumar momentarily forget all the hardships.

“Since her birth, when Aruna suffered deformity in both her hands, we have treated Aruna like other children and have supported her life as a normal person. While I struggled financially, I took loans apart from spending our savings to support her dreams. It’s her willpower and eagerness to compete among the best, which has resulted in her getting selected for the Tokyo Paralympics and there cannot be a bigger joy for us to see our daughter compete in Tokyo and win a medal for India,” said an emotional Kumar while talking with The Indian Express. 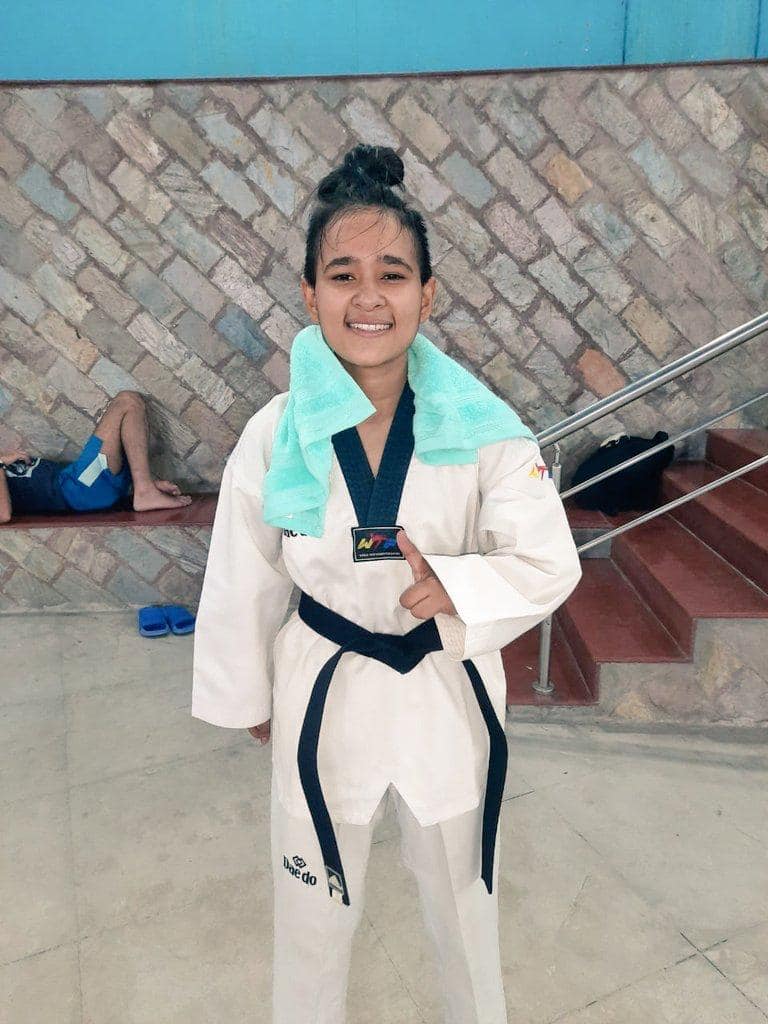 While the Indian taekwondo team had missed the world and Asian qualifiers held in Jordan last month for the Tokyo Paralympics, Aruna was among the eight athletes from eight countries, who were offered the bipartite quotas for Tokyo by IOC and World Taekwondo. The 21-year-old, who is ranked fourth in the world in her category, will be competing in the 49 kg weight bracket in the K-43 category.

“When we missed competing in the world and Asian qualifiers in Jordan due to the travel ban due to the pandemic, I was a bit frustrated but I had a belief that my world ranking would help me get the quota. To get a chance to compete in Tokyo is the biggest motivation for me and I will aim to win a medal in Tokyo,” shared Aruna, who will be one of the 72 taekwondo players from 37 nations competing in the Paralympics as the sport will make its Paralympics debut.

It was in 2008 that the Haryana youngster opted for mixed martial arts when Bhiwani coach Robin Singh visited the government school at her village for a training camp. Aruna would compete in the Taekwondo Nationals in the normal category and would claim the bronze in the junior category in the SGFI nationals in 2015 before becoming the junior champion in the 38 kg category in the Junior National Taekwondo Championships in Ballabgarh in 2016. With her not being eligible for international events in the normal category, the Haryana youngster opted to compete in the Paralympics category.

“I always believed that I could compete against anybody and hence competed in the normal category till 2017. It was only when I was declared not eligible to compete at the international level that I opted to compete in the Paralympics category,” said Aruna, who is a student of B.PEd at Chandigarh University, Mohali.

A gold medal in the para nationals at Shimla in 2017 was followed by a silver medal in the Asian Para Taekwondo championship in Vietnam in 2018, before the youngster won the bronze medal in the World Para Taekwondo championship in Turkey, where she lost to world number one Victoria Marchuk of Ukraine in the semis. She also won the national title the same year apart from a bronze medal in Asian championships. “The silver medal in Asian championships in 2018 boosted my confidence and reaching the semi-finals in the world championships made me believe that I could compete against the world’s best. Apart from full support from PTAI, coaches including Ashok Kumar, national coaches Sukhdev Singh and Swaraj sir have been working with me and I hope to give my best,” said Aruna. Aruna’s coach, Ashok Kumar, believes that the youngster can win a medal in Tokyo and has been working on her technique.

“Since her early days in the sport, she has the flexibility to excel as a taekwondo player. We worked on her balance, endurance and strength. In Tokyo, she will face challenge from Ukraine, China and Chinese Taipei players and we are hopeful that she can get past them,” said Ashok Kumar.

As for Aruna’s mother, Sonia, she is waiting for a day when the youngster wins a Paralympic medal. “She likes to have lassi and paneer. I know she will ask for it on her return if she wins the medal in Tokyo,” said Sonia.