More than a month has passed since the curtain came down on the Tokyo Paralympics. At her home in Jagatpura, Jaipur, away from the hustle and bustle of the state capital, Avani Lekhara’s life has drastically changed in some ways and in some ways not so much. A 10m Air Rifle SH1 gold medal and a 50m Prone event bronze medal adorn her bed, signifying that she is the first Indian woman to win a Paralympics gold and the first from the country since Joginder Singh Bedi in 1984 to win two medals at the Paralympics. And yet, every day as Lekhera looks up to her medals, there is a tinge of wistfulness that follows.

“Everybody was cheering and whistling and shouting. But I felt sad. For everyone, I had won gold and equalled the world record but for me, I missed out on the record being solely my own by 0.1. My final shot was a 9.9. I always want to make sure my last shot is a good one. My emotions over that moment are mixed,” Lekhera says.

Lekhara, 19, is in the midst of giving her fourth-semester exams while completing her Bachelors in Law from Rajasthan University. But her mind often drifts to that last shot in the 10m Air Rifle final.

The nit-picking over her momentous achievement is a far cry from the start of the Olympics, when it was a different kind of emotion for Lekhara, paralysed from the waist below after an accident at the age of 12.

On August 23, the largest Indian team to have ever qualified for the Paralympics landed in Tokyo. Within a few hours of reaching the Games Village, Lekhara felt butterflies in her stomach. The enormity of the challenge made her nauseous and nerves hit like a tidal wave.

Lekhara, in her specially-designed wheelchair and with a pair of airpods in her ears, decided to take a stroll around the Games Village. It was there that her personal coach Suma Shirur joined her. After a few minutes, Lekhara’s apprehensions about her first match finally bubbled over and a question was posed to her coach: ‘What if I don’t win a medal?’ 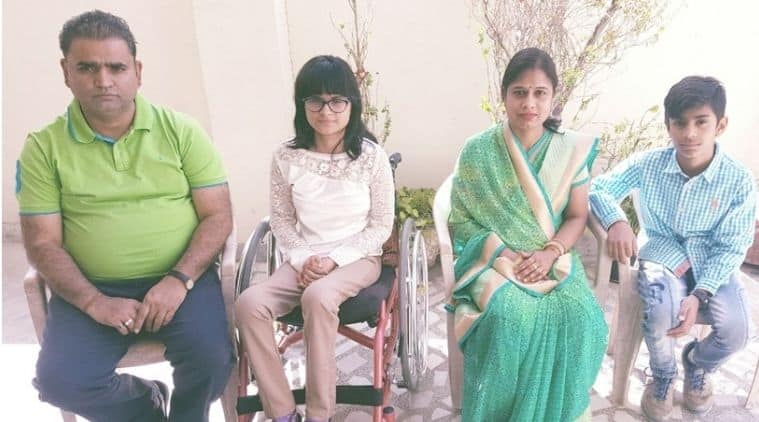 Lekhara had reason to be apprehensive. Since the time she started shooting, from succeeding at the nationals to the para-shooting championship in Al Ain in 2017, a fear of sorts had developed. Silver and bronze medals fell into her lap in abundance but the young shooter simply wasn’t able to touch gold.

“Suma ma’am told me that whether I win or lose, get a medal or not, our relationship wouldn’t change. She would still be by my side and would still be there to help when I needed it. All she asked of me was to perform my best so that I wouldn’t have any regrets,” Lekhara told The Indian Express.

Despite the words of assurances from Shirur, Lekhara’s qualification was a disaster. She remembers asking herself, ‘Why is this happening today of all days?’ It was almost as if all the nerves that she had been enduring until came out to the fore. At the end of the qualification, she was seventh in the standings. All she had was 45 minutes to prepare for the finals and the encouraging words of Shirur and her own mother constantly in her ear at the shooting range. 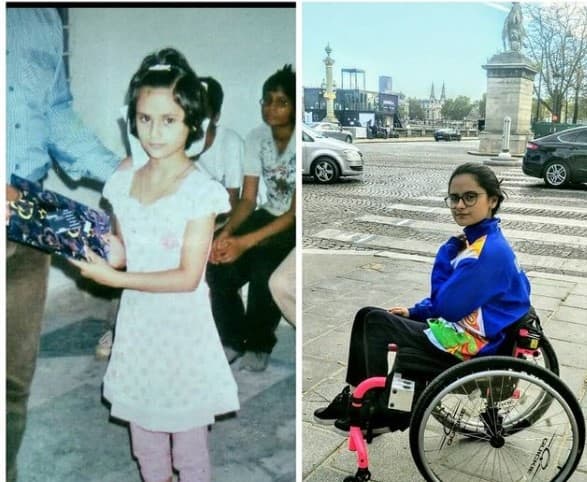 “The truth is nothing was going right at that time,” said Lekhara. At that point, she had only two technical aspects of shooting to bank on. She decided to focus on her pre-aiming and follow-through.

Follow-through is how shooters continue to look at the target after taking the shot. (They also hold their weapon steady after pulling the trigger). This gives the pellet time to go and hit on the target. Pre-aiming is when the shooter prepares the body for a shot before putting their cheek on the rifle.

Every muscle, every aspect of the mind needed to be in cohesion before the shot and once that trigger was pulled, Lekhara needed to make sure that the pellet went where she wanted it to. When nothing in qualification was going her way, this was the only means to bring herself back on track.

“Everything that could have gone wrong, went wrong in qualification. But I also felt that the worst was behind me. I was seventh and at worst would come eighth.”

The ability to stay calm when things are not going one’s way is something that Lekhara has been well versed with. When the 2020 para-sports season was canned because of the global pandemic, Indian shooters were provided with shooting range simulators (digital target setups). Even then, staying at home and practising was not ideal.

“Initially, it was tough. You don’t get the feel of training at a range. I was practically shooting from my kitchen hallway to the master bedroom. Somebody is cooking, sometimes the TV is on… it wasn’t a proper way to train,” said Lekhara, pointing to the kitchen and the bedroom of her house in Jaipur.

Soon a schedule was finalised. One of her first shooting coaches in Jagatpura, Chandra Shekhar was regularly with her during this period, helping in fine-tuning her shooting skills. His concern was more to do with the 50m three-position event, and particularly the prone position. 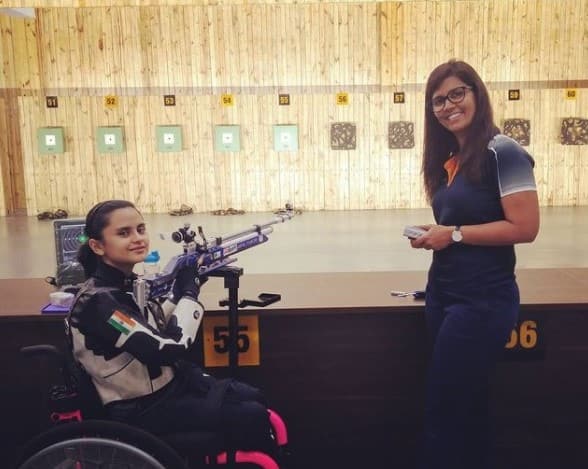 In the SH1 category of shooting at the Paralympics, athletes with paraplegia or non-functioning limbs participate and a competition like three-position has to be especially tailored for them. Since standing, kneeling or prone positions are all not possible, adjustments are made. For the standing position, athletes like Lekhara shoot from their wheelchairs. For kneeling, a flat board is provided along with a circular object on which the elbow is rested. It is an attempt to mimic an elbow resting on the knee.

But it was the prone position that would cause the most physical discomfort to Lekhara. “The type of injury she has, sensitivity below her waist isn’t there. So sometimes the position of her elbow wasn’t where it was supposed to be,” Chandra Shekhar told The Indian Express. The prone position would also require Lekhara to lean forward and the extra pressure on her back was something that was causing her discomfort. So much so that in the months of May and June, she decided to stop shooting completely and focus purely on physiotherapy.

“In March during the World Cup, I felt some pain and thought I couldn’t go to the Paralympics with this issue.”

She added, “It was a risk. You can’t stop shooting a few months before such a big event. I have the confidence to shoot but to shoot while being in pain is another matter altogether. I was happier with my bronze medal because 3P is a longer match. 120 shots, almost three-and-a-half hours of qualification followed by 45 shots in the final, which is almost double the time of a normal final. There were back exercises, icing sessions, and sprays for two-three hours a day.”

During this period of not shooting, Lekhara focused on mental exercises. She constantly visualised various scenarios in her mind. It is a strength of hers that Shekhar acknowledges has led her to such heights.

“Her grasp and intelligence regarding shooting is very good. She studies the sport, takes notes, and tries to understand the best way to succeed. For her, shooting was something that she wanted to practise at the highest level. Nothing else mattered,” said Shekhar. In fact, he was so sure of a medal that he texted her father on July 21 at 1 in the morning to assure him that the gold was hers.

Even after the qualification, Shekhar thought the gold was his ward’s, but Lekhara wasn’t so sure. All she had going for her at that point was the knowledge that she was in the finals and it was now a clean slate. But the pre-aiming and the follow-through worked. All her preparations allowed one of her worst qualification performances to be forgotten. With one shot remaining in the finals, she was assured of the gold.

That gold medal now is the first thing she sees on waking up and the last thing she gazes at before sleeping, but the mind continues to think about that last shot.

“I’m very bad at remembering the good things. I even remember everything that happened 10 years ago. In a sense, it’s a good thing because every match that I’ve played in, I come back and think about the mistakes I made. Sometimes I feel ki maine sabh sahi kara lekin fir bhi theek nahi gaya (I did everything right but it didn’t work out). I really don’t like when that happens.”