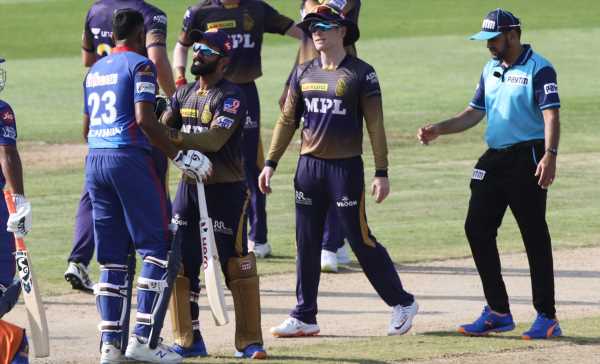 Spin legend Shane Warne slammed fellow spinner Ravichandran Ashwin after he clashed with Eoin Morgan during the IPL match in Sharjah on Tuesday.

The Delhi Capitals spinner and the Kolkata Knight Riders captain were involved in a heated exchange after Ashwin was dismissed by Tim Southee in the last over of Delhi’s innings.

KKR’s players were already upset after Delhi Skipper Rishabh Pant and Ashwin went for a second run off the last ball of the 19th over despite the ball deflecting off the Delhi skipper’s arms when completing the run.

Ashwin got back at KKR when he gave Morgan a huge send-off after taking his wicket.

Warne termed Ashwin’s actions as ‘disgraceful’. ‘The world shouldn’t be divided on this topic and Ashwin. It’s pretty simple — it’s disgraceful & should never happen. Why does Ashwin have to be that guy again? I think @Eoin16 had every right to nail him!!!!’ Warne tweeted on Wednesday.

KKR Wicket-keeper Dinesh Karthik, who plays with Ashwin for Tamil Nadu in domestic cricket, played mediator during the on-field spat.

‘I do not think Morgan appreciates that he is someone when the ball hits the batter, he expects them not to run because of the spirit of cricket,’ DK said after the match.

‘It is a very grey area, a very interesting topic. I have my own opinion on it, but I can just say I am happy to play peacemaker.’

Two years ago, Ashwin was involved in a huge controversy when he ‘mankaded’ Rajasthan Royals’s Jos Buttler during the 2019 IPL, the first to be dismissed in such a manner in the history of the Indian Premier League.