Marcus Rashford scored twice as Manchester United extended their 100 percent record on the road, coming from behind again to win 3-2 at the English Premier League’s bottom club Sheffield United on Thursday.

United have now won all six away league games this season — conceding first on each occasion — and the latest comeback victory moved them up to sixth place, on 23 points, five behind leaders Liverpool but with a game in hand.

Sheffield United’s solitary point from 13 matches is the worst start by a team in any top-flight campaign and the Blades have now lost eight matches in a row and 15 of their last 16 going back to last season. 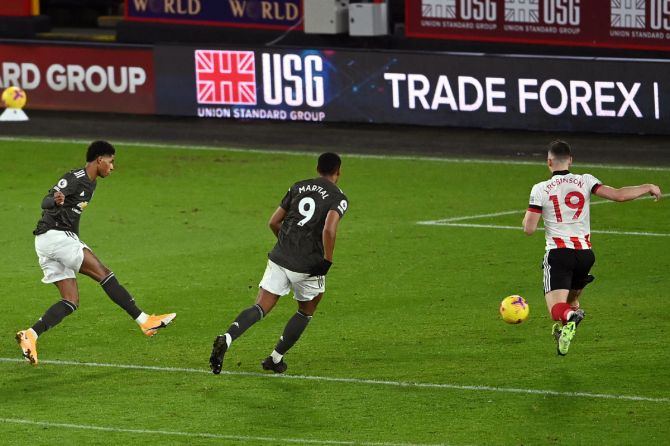 But Henderson made a nightmare start, getting caught in possession by Oliver Burke who slid the ball to David McGoldrick who fired the Blades into a fifth-minute lead.

John Fleck failed to take a great chance to make it 2-0 for Chris Wilder’s team and that let-off sparked Manchester United into life.

After wasting a good opportunity with a wild shot, Rashford made no mistake in the 26th minute as he collected a long ball from Victor Lindelof with a deft first touch and deadly first-time strike.

Paul Pogba set up the second with a one-touch pass on the turn, over the top of the Sheffield defence to Anthony Martial, who rounded Aaron Ramsdale before slotting home.

Six minutes after the break, Rashford added his second to make it 3-1, finishing off a fine passing move started by Pogba, with a shot that squeezed under Ramsdale’s body.

McGoldrick pulled one back for the Yorkshire strugglers three minutes from the end, heading in a corner from close range before Henderson made amends for his early mistake with a reflex save to keep out a Lys Mousset drive.

Solskjaer was pleased with most of United’s display after another slow start.

“We played some brilliant football between their first goal and their second goal – the end was a bit too uncomfortable for my liking,” he said.

Asked about his players believing they could yet win the title, the Norwegian was cautious.

“We can’t get our heads too far ahead, but I am happy the players might be thinking that way because that means recovery, focus is better and those little margins mean a lot,” he said.

“It has given myself and the players a belief that if we do play in the manner we played – especially out of possession – that there is something left in this season for us,” he said.

“I will stick my head on the pillow tonight knowing the team has left everything out there.” 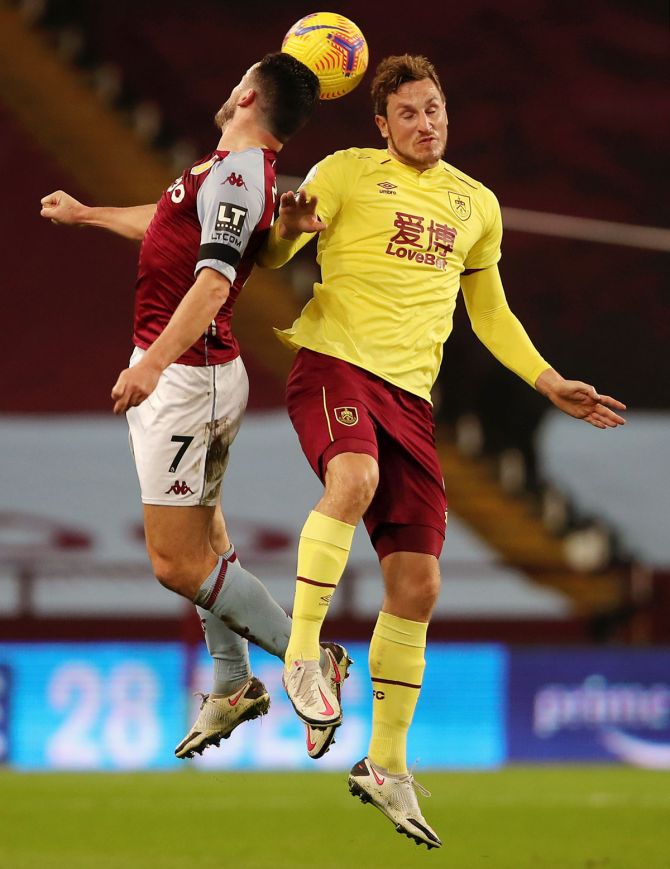 Aston Villa were left to rue the woodwork and missed chances as they were held to a goalless draw in an entertaining Premier League game at home to Burnley on Thursday.

Dean Smith’s Villa side created enough opportunities to win the match and had 27 shots but only got seven of them on target and Burnley keeper Nick Pope dealt comfortably with most.

The game was surprisingly open with Villa’s Jack Grealish and Burnley’s Dwight McNeil both able to show off their dribbling skills, but the Clarets will feel fortunate to have headed North with a point.

“It was a performance worthy of a win, we had enough chances to win three games. We were so good, 27 attempts to six shows that,” Smith said.

Villa hit the woodwork twice in the first half with Anwar El Ghazi’s free kick superbly tipped on to the bar by Burnley keeper Nick Pope before Ahmed Elmohamady headed against the post from a corner.

After the break, the influential Grealish created plenty of openings for Villa but El Ghazi wasted two good chances, weakly shooting straight at Pope on both occasions.

Villa defender Tyrone Mings had a good chance late in the game but headed wide after he was left unmarked in the box at a free kick.

Burnley’s best chance had fallen to Chris Wood in the 22nd minute with a header from a Josh Brownhill cross which Emiliano Martinez did well to keep out.

The result left Villa in 11th place on 19 points while Burnley move out of the bottom three into 17th spot on 10 points.

Burnley are unbeaten in their last three games including Sunday’s win at Arsenal and manager Sean Dyche was relieved to keep that run going.

“I am pleased with the point overall. They edged it with the chances and the quality of chances,” he said.

“When your two away games are Arsenal and Villa you will take four points and two clean sheets”.