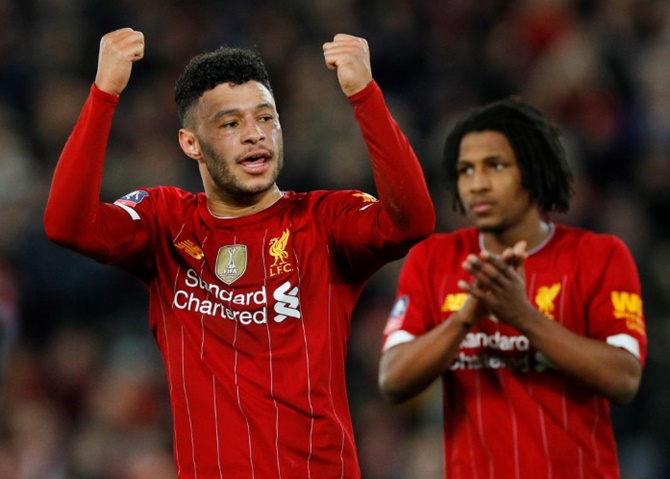 A stunning strike from 18-year-old Curtis Jones gave a youthful Liverpool a 1-0 win over Everton in their FA Cup, third-round tie at Anfield on Sunday.

Liverpool manager Juergen Klopp made nine changes to his side, giving starts to three teenagers, while his Italian counterpart Carlo Ancelotti opted for a largely full-strength Everton lineup.

The gulf in experience between the two sides was barely evident, however, and will simply add to the pain for Everton, who are without a win at Anfield since September 1999.

For Liverpool it was a performance which illustrated the talent coming through the production line at their Melwood training ground.

For local-born academy product Jones, it was a game he will never forget, delivering his first senior goal in a Merseyside derby.

“I can’t sum up my emotions. For me it’s huge just being around this team every day and learning from this group of players. There are world-class players all over this team but I think I went out and showed what I could do on the pitch,” he said.

Everton should have gone into the break ahead, with Liverpool keeper Adrian foiling goalbound efforts from Dominic Calvert-Lewin, Mason Holgate and Richarlison in the first half.

Ancelotti will be disappointed that on each of those occasions his players aimed straight at the Spanish keeper but worse was to come.

Klopp was visibly appreciating the sight of his youngsters buzzing around the field playing enterprising football with the German raising his arms in applause as teenagers Neco Williams, Harvey Elliott and Jones showed they are well-drilled in the Liverpool method.

Jones delivered the killer blow in the 71st minute when after a swift exchange with Divock Origi he unleashed a superb curling effort into the top corner, leaving Everton without a win against their rivals since October 2010.

“They played brave football. Unbelievable individual performances from the kids and the adults as well,” said Klopp.

“Sensational game and a sensational goal from a Scouser — who could ask for more?”

Klopp impressed but not surprised by teen hero Jones 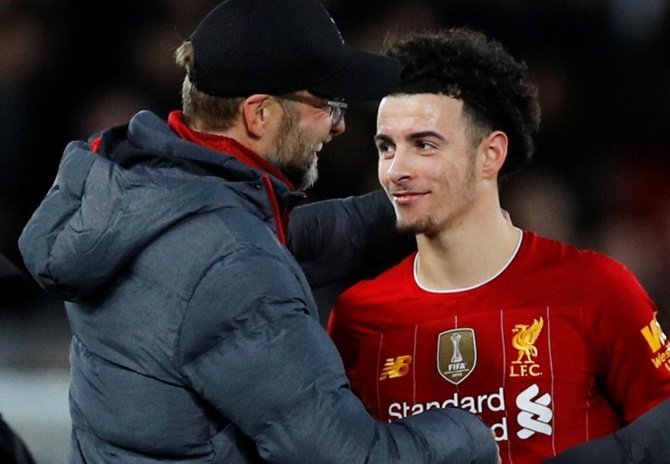 Liverpool’s 18-year-old midfielder Curtis Jones celebrated a dream first goal for the club when his spectacular shot was enough to defeat derby rivals Everton in the FA Cup third round on Sunday.

For his manager Juergen Klopp, the sight of the Liverpool-born teenager curling in a winner that any of his first-choice stars would have been proud of was no surprise at all.

“Unbelievable player, Scouser, very confident, can’t wait to play in the first team, good, rightly so, he is (on) a very good way,” said Klopp after the 1-0 win.

“I have known him for three-and-a-half years, he has made big steps, will 100 per cent be a Liverpool player, if nothing strange happens. Great.”

“That he scores that goal? I am not surprised. He is for these situations. Still a lot to learn, a lot to improve. Sometimes people forget in training, he is 18, unbelievable,” he said.

Jones has been making clear to Klopp that he feels ready for the first team and admitted he had found it hard to feature only infrequently for the Premier League leaders and European champions.

“I’ve been basically begging to come on but hopefully I’ve topped it off with a good goal,” said the academy product.

“I can’t sum up my emotions. For me it’s huge just being around this team every day and learning from this group of players. There are world-class players all over this team but I think I went out and showed what I could do on the pitch,” he added.

Everton manager Carlo Ancelotti rejected the suggestion that his team had been affected by Liverpool making nine changes and fielding such a young side.

“The line-up of Liverpool didn’t affect our idea of how to play; we knew that Liverpool put in fresh players and that the intensity could be a high intensity so I think the defeat arrived because we were not able to keep the intensity in the second half,” he said.

We lost energy, we lost confidence, we were not able to build up quick from the back.”

The Italian has faced a busy schedule of matches since taking over last month and said he was looking forward to finally getting down to work on the training ground with his squad.

“We are going to speak and work together to find a solution to help improve the team. I know we have to work,” he said.

“Next week we have all week to prepare the team and train. In this period we played only games and didn’t train practically. To train will be good to improve the quality of our play and to have more confidence on the pitch.”