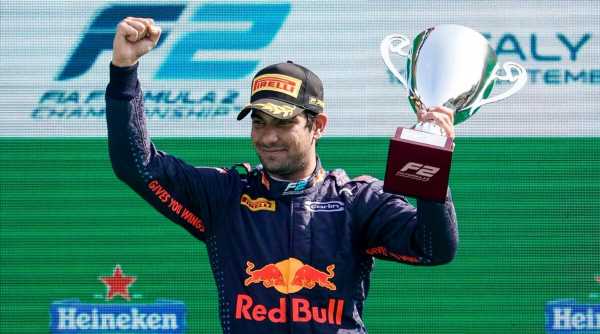 Jehan Daruvala, the Carlin Racing driver, proved his grit in the second sprint in Monza with a lead of 6.114 seconds while climbing to the podium after a consistent race on Saturday. Jehan who hails from Mumbai started second at the Temple of Speed behind German racer David Beckmann but had an excellent start and stopped late to move into the first corner.

The moment racing resumed, after an incident resulted in a Virtual Safety Car situation, Jehan drove a consistent race. When Beckmann was out of DRS range, Jehan increased his lead and with three laps to finish, Jehan opened a comfortable five second margin. Beckmann under pressure fell down to third while Trident driver Bent Viscaal of the Netherlands moved into second. Soon former F3 champion, Prema Racing driver Robert Shwartzman from Russia also overtook the German.

This was Jehan’s third podium of the season and second Formula 2 victory after the Sakhir Grand Prix weekend last season.

“It’s special to hear the Indian national anthem on the top step of the podium. Winning at Monza is every racer’s dream. Getting ahead of David (Beckmann of Campos Racing) at the start and then breaking the tow were critical moments in the race,” said an elated Jehan while thanking Carlin for a great car in Rayo Racing.

“I think that a win was long overdue this season, so I am very happy. This weekend has been good so far, I’ve been consistently quick. I think we deserved the win, hopefully, I can repeat it tomorrow,” the Indian told fiaformula2.com.

Jehan created history when he became the first Indian to win a Formula 2 race during the Sakhir Grand Prix in Bahrain during the last week of March.

Prema are leading with 229 points, ahead of UNI-Virtuosi on 175 and Hitech on 162 while Carlin is fourth with 160 and ART fifth with 120 in the race for the teams’ championship title.