Harmilan Kaur Bains felt like a weight had lifted off her shoulders when she broke the two-decade old national record in the 1,500 metres at the 60th National Open Athletics Championships in Warangal.

Parental pressure has been a constant shadow for the daughter of two former athletes, one an Asian Games medal winner.

Father Amandeep Singh specialized in the 1,500 metres and mother Madhuri Singh is an Asian Games silver medalist in the 800 – incidentally from Busan. They would micro-manage her career. She ran both events and the constant advice and expectations had proven detrimental for the athlete earlier.

This time Harmilan travelled on her own to Warangal. Her father reached the city a couple of days later and watched the race from the stands like a spectator. “They are very involved and put not just me but my coach also under pressure. They would want to know every little detail. They would give advice like ‘If you train so much your time will be this’ or ask questions to the coach like ‘why is endurance not happening? How will you run with this workout? I needed to travel on my own,” Harmilan says.

Her coach Suresh Saini convinced her parents to stop the constant monitoring. “His theory was I needed a free mind,” Harmilan says.

On Thursday, after the race Amandeep clicked a selfie with his daughter who posed with the gold medal. But she didn’t listen to any unsolicited advice.

Running without expectations is only part of the reason why Harmilan could become a national champion. From a personal best of 4:14.68 at the start of last year, Harliman has improved by nearly 10 seconds. Shedding weight, focusing on intense speed workouts and improving biomechanics has helped, coach Saini says.

“Last year her body fat percentage was 26. Now it is 15 per cent. She had disturbed running mechanics. We also worked on improving bio-mechanical movements which makes her a more efficient runner. Also because of lower muscle mass her speed was not the best. That is why I made her do a lot of uphill running like 60 metres, 80 metres in Dharamshala where we trained,” Saini, a sprint coach who had been in charge of national relay teams, says. 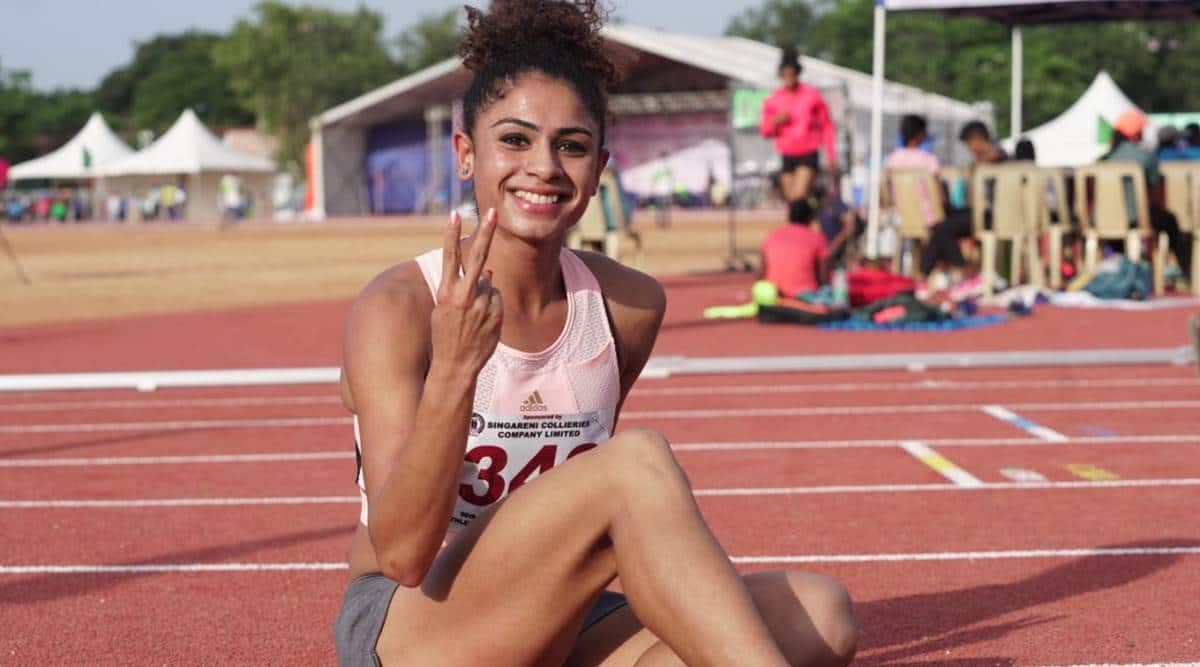 Even in training, the coach keeps Harmilan on her toes. She trains with boys who clock four minutes in the metric mile.

The hard work paid off when she rewrote the national record which also helped her bounce back from the disappointment of not qualifying for the Tokyo Games.

In June, at the Indian Grand Prix-4 Harmilan clocked 4:08.27 to raise hopes of a Tokyo berth but in her next competition, the national inter-state she struggled to 4:15.52. Her menstrual cycle upset her rhythm, she recalls.

“Just before the race I got my periods. I ran to the washroom as I had back pain. I have run with periods earlier but this time it happened too close to the race. I had lots of cramps because of periods. Also it was very hot,” she says.

In Warangal the conditions were near-perfect. “I think it was about 26 degrees. Weather was too good.” There was a minor hiccup before the Open nationals. She had participated in the 400 metres at a state meet and felt her hamstring tightening up. Her coach stopped track workouts.

“I didn’t touch my spikes for a week. I was little worried about the Open national. My target was the national record. But the coach was confident that I would pull it off.”

Harmilan is on an eight-race streak since the start of last year. She hopes to go from strength to strength to make up for the lost years.

In 2017, she injured her knee because of excessive workouts and it took her nearly a year to come back. She got the opinion of doctors in Delhi and Bengaluru but the diagnosis was not good. “They told me my career was over. I had to wear a knee cap which cost Rs 20,000.”

A cook, a saviour

Help came from the most unlikely source, a cook at the training centre in Dharamshala. “He had helped hockey players recover from injuries by giving massage. He is a miracle worker. There is some sort of magic in his hands. I can say that cook uncle cured by knee injury.”

The first setback was in 2013, when as a 13-year-old she failed a dope test. The local doctor in Mahilpur had prescribed her medicines for tonsillitis and then went AWOL when he was called to testify before a National Anti-Doping Agency panel. “I was participating in the Under-14 category. I was very sick back then. I had no coach. Can someone knowingly take steroids at that age? When the time came for the doctor to give his version, he panicked and left. He didn’t even produce his degree. It came as a shock to me. I lost two years.”

Having a national record in her name has now eased the pain of a difficult past. A burning ambition to be the best has been fulfilled. “My first-ever race was a zonal meet when I was in Class 3. I was a class topper in academics but finished second in the race. I wanted to quit sports because of the second-place finish. In the next race I won, my photo was published in the paper. From then onwards it has been only sport for me.”