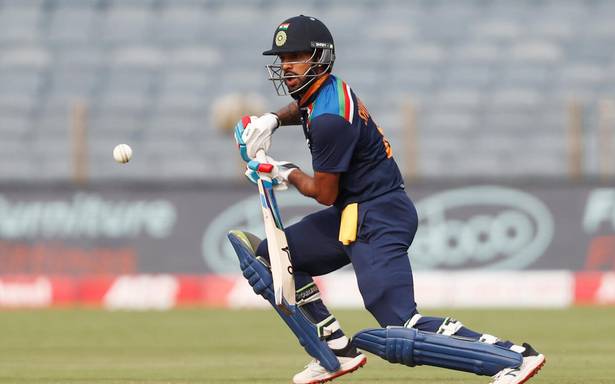 Rahul also got welcome runs after a lean run in the T20 series.

Shikhar Dhawan delivered under pressure with a solid 98 before Krunal Pandya smashed the fastest fifty by a debutant to fire India to 317 for five in the first ODI against England in Pune on Tuesday.

Dhawan hammered 11 fours and two sixes in his 106-ball knock while Krunal plundered seven fours and two maximums in his entertaining innings.

Rahul also got welcome runs after a lean run in the T20 series.

Put into bat here, Rohit Sharma (28 off 42) and Dhawan shared 64 runs for the opening wicket.

Dhawan, who has lost his place in the playing eleven for T20s, got a ‘life’ when hooked over fine-leg to get his fourth boundary.

India were placed at 64/0 after 15 overs. However, Rohit soon perished, after getting an outside edge to wicket-keeper Jos Buttler off Stokes.

Skipper Kohli joined Dhawan and the two rallied the innings.

Kohli got his first boundary, a cover drive, on the 17th ball and was in his element as he relied on drives and pulls. Dhawan brought up his fifty, with a maximum, a slog-sweep, off 68 balls, in the 24th over, and then changed gears.

Dhawan got another life after Moeen Ali dropped a sitter at deep-mid-wicket off Adil Rashid.

Kohli and Dhawan took on Ali, as the 29th over fetched India 15 runs. Kohli, who raced to his 61st ODI fifty in 50 balls, was dismissed, after he was caught in the deep off pacer Mark Wood (2/75).

India lost their way in the middle overs before Krunal and Rahul went on the offensive. Dhawan pulled one straight to Eoin Morgan at mid-wicket to miss out on a hundred.

Sam Billings went off the field after hurting his shoulder while trying to save a boundary.

There was another injury scare for England when skipper Eoin Morgan was hit on his finger.

ECB in its update said both batsmen should be able to bat.