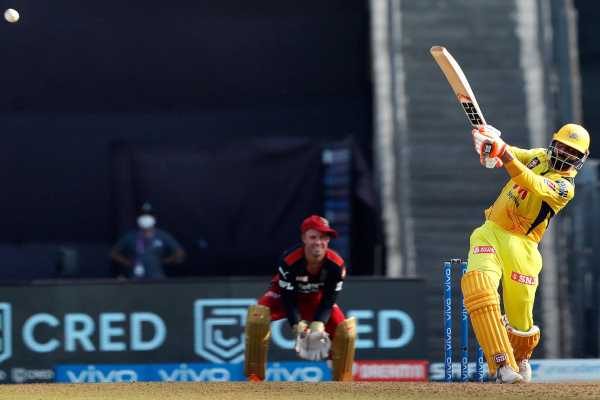 Images from the IPL match between Chennai Super Kings and Royal Challengers Bangalore, in Mumbai, on Sunday.

Ravindra Jadeja went on the rampage in the death overs and slammed a quickfire fifty as Chennai Super Kings put up an imposing 191 for 4 in the IPL match against Royal Challengers Bangalore, at the Wankhede stadium, in Mumbai, on Sunday.

Coming in at the fall of Faf du Plessis’s wicket in the 14th over, he set an IPL record-equalling 37 runs with five towering sixes in the last over in a blazing knock of 62 off 28 balls to hoist the former champions as 74 runs came off the last five overs.

He hit the first delivery of the last over, bowled by Harshal for a six, the next also for six, the third, which was a no-ball, for a six, and another six off the free-hit, which brought up his 50.

Harshal then conceded just two before Jadeja hit another six and four as 37 runs came from the over.

Du Plessis scored 50 off 41 balls and shared a first-wicket stand of 74 runs with Ruturaj Gaikwad (33) before Harshal Patel wreaked havoc.

Harshal was most successful bowler for the Royal Challengers, returning figures of 3 for 51 despite giving away 37 runs in his fourth and final over. 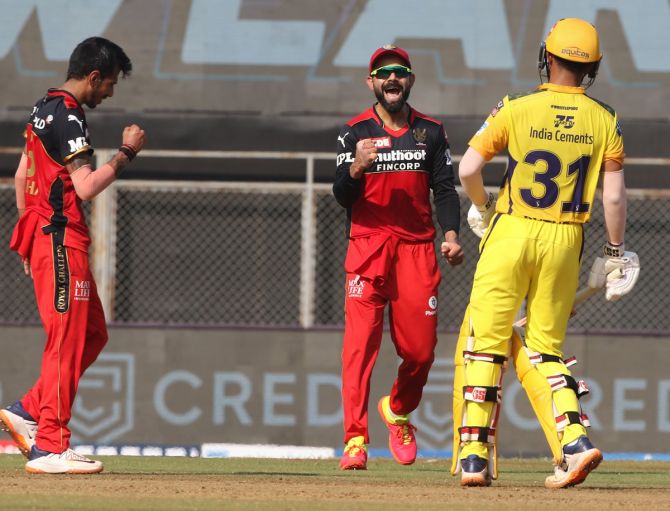 There were two changes in the Royal Challengers Bangalore playing eleven too. Jhye Richardson and Shahbaz Ahmed were left out and Dan Christian and Navdeep Saini included.

After a watchful first over, from which CSK got six runs — du Plessis hit a four — the CSK openers settled down and grew in confidence, taking 11 off the third over as Du Plessis hit a six off the first delivery.

By the time the powerplay overs were completed they were 52 without loss. Gaikwad scored 22 (off 18 balls) of those runs and du Plessis 27 off 19. The pair took the score to 74 without loss by the ninth over before Yuzvendra Chahal returned for his second spell – after conceding 15 off his first two overs – to end the partnership with his first delivery.

Gaikwad misread a looping leg-spin delivery from the bowler and miscued his sweep shot to Kyle Jamieson, who ran in from deep backward square and took the catch. He was out for 33 off 25 balls, which included 4 fours and a six, as CSK were 74-1 at the start of the tenth over.

Suresh Raina, who came in at the fall of Gaikwad’s wicket, got going immediately, hitting Chahal for a six off the last delivery his over as CSK were 83-1 after 10.

He hit Washington Sundar for another one in the 12th over and  gave Saini the same treatment in the next. 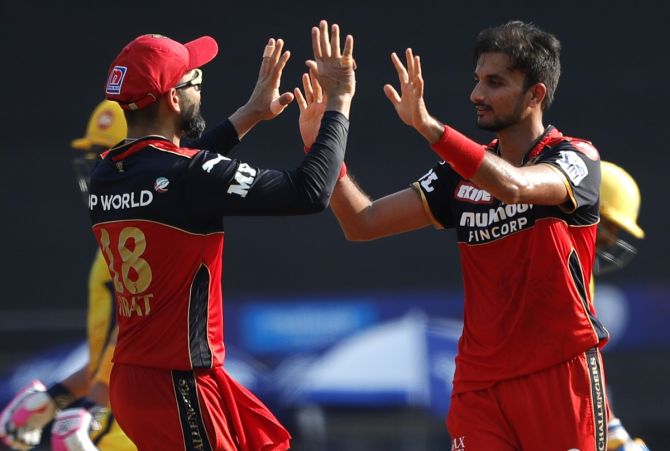 Meanwhile, du Plessis brought up his 50 off the first delivery of the 14th over, bowled by Harshal Patel.

The right-arm pacer then struck with the fourth delivery of the 14th over, having Raina caught by Devdutt Padikkal.

The batsman went for the big shot, did not connect cleanly and Padikkal took the catch at deep mid-wicket. 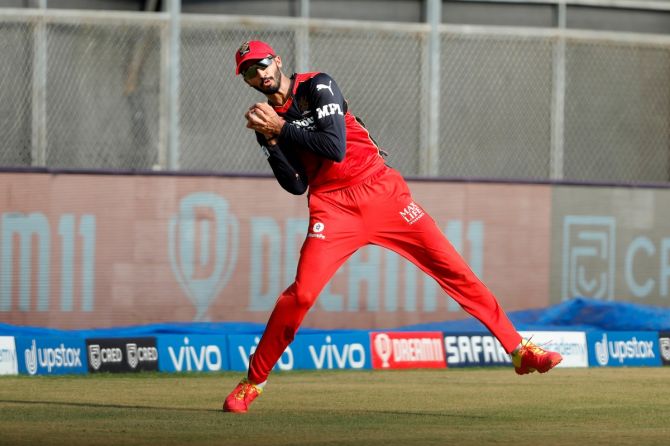 Raina was out for 24 off 18 balls, which included a four and 3 sixes, as CSK lost their second wicket.

Harshal struck again off the next delivery, this time getting the big one of du Plessis. CSK lost two wickets for just a run and were reduced to 111-3 after the 14th.

Du Plessis went after a slower delivery from Harshal, but was unable to middle his cross-batted shot and Dan Christian did well to take the catch near the boundary rope.

The South African was out for 50 off 41 balls, including 5 fours and a six.

Ravindra Jadeja, the new-man in, was dropped by Christian off Sundar on 1 and made the most of the ‘life’. He hit Jamieson for two fours and Ambati Rayudu hit a six off the bowler to get 17 runs from the 16th. Mohammed Siraj conceded just six runs off the 17th over to check the flow of runs before Harshal picked his third wicket, having Rayudu caught by Jamieson near the long leg boundary for 14 off 7 balls.

Siraj then conceded nine off the penultimate over.

With Dhoni at the other end, Jadeja went on the rampage in the last over, bowled by Harshal. He hit the first delivery for a six, the next also for a maximum, the third, which was a no-ball, for a six, and another six off the free-hit, which brought up his 50.

Harshal then conceded just two before Jadeja hit another six and four as 37 runs came from the over and CSK finished with 191 for 4.

The last five overs got Chennai Super Kings 74 runs for the loss of one wicket.