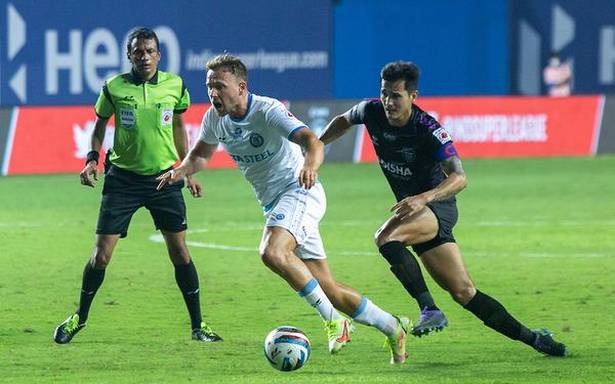 His three strikes, including one off a sublime free kick, flatten Ramirez’s side

Greg Stewart produced one of the best individual performances of the eighth edition of the Indian Super League as Jamshedpur FC blitzed Odisha FC 4-0 at the Tilak Maidan, Vasco, on Tuesday. Owen Coyle’s Jamshedpur kept up with its impressive start by climbing to the second spot after six matches.

It was a case of men against boys with Jamshedpur being superior in all departments and out-muscling, out-running and out-pressing its opponent.

Despite a good start to the season, Odisha averaged 12.5 shots per game against it — the worst record in this category — and Jamshedpur punished it for the defensive shortcomings with clinical finishing in the first half.

The result was beyond doubt after the opening 35 minutes with Jamshedpur’s second striker Stewart scoring a first-half hat-trick and also providing an assist. Stewart’s corner in the third minute was turned in by Peter Hartley and in the very next minute, the Scotsman curled the ball into the top corner with his weaker right foot from 25 yards out.

Stewart then scored off a sublime free-kick, bending the ball over the wall in the 21st minute, before completing a treble with a dribbling run from the halfway line and finishing with his weaker foot again.

Odisha’s problems were emblematic of skipper Vinit Rai’s struggles. Hartley, who passed a fitness test to make the XI, overpowered Rai inside the box to net the opener. Vinit was dispossessed repeatedly and left chasing the shadows of the Jamshedpur attackers. When Stewart added Jamshedpur’s fourth, Odisha head coach Kiko Ramirez looked shell-shocked.

Jamshedpur threatened to score more but Odisha got away with last-minute blocks and poor finishing by the former.

Jamshepdur’s perfect night was topped off with TP Rehenesh, who had just one save to make, and the defense holding onto the side’s first cleansheet of the season.