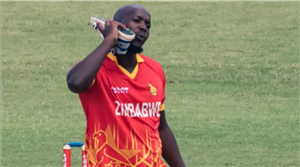 Jongwe was named Man of the Match as Zimbabwe beat Ireland in the 5th T20I. He then went against tradition by calling for an English interpreter, saying it was a matter of pride to be speaking in his mother tongue. Zimbabwe’s Luke Jongwe has been hailed for conducting his post-match interview in his mother tongue Shona after a victory in Ireland on the weekend.

Jongwe was named Man of the Match for his three wickets as Zimbabwe beat Ireland in the 5th T20I of their series on Saturday. He went against tradition by calling for an interpreter when called upon to receive the award. Zimbabwe Cricket spokesperson, Darlington Majonga, stepped in as the English interpreter as Jongwe responded to questions in Shona.

The 26-year-old cricketer said it was a matter of showing pride in his language at the international stage. Jongwe speaks fluent English and has had club cricket stints in England.

He tweeted afterwards: “Proud to be a Zimbabwean”.

“It is refreshing to hear Luke Jongwe proudly use his native language on a global platform,” Zimbabwe’s Sports and Recreation Commission responded to the interview with a tweet.

READ | My ties with Zimbabwe have been cut: Henry Olonga

The Shona language is a Bantu language of the Shona people, who form the majority of Zimbabwe’s population. While English is Zimbabwe’s lingua franca, used in government and business as well as the main medium of instruction in schools, Shona is the mother tongue of more than 70% of the country’s population.