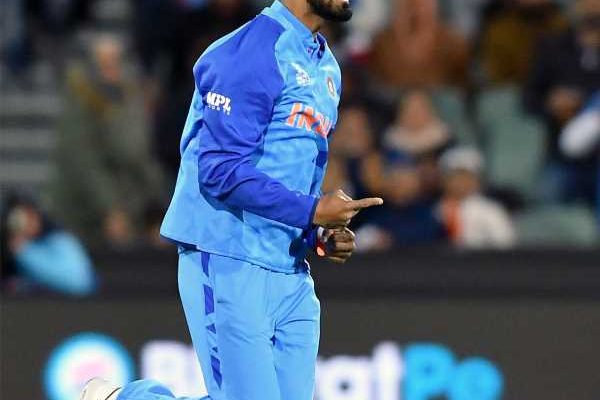 K L Rahul managed just single digit scores in his first three games in the T20 World Cup and it seemed his ouster was just round the corner.

Yet, the team management persisted with him in a must-win game against Bangladesh, and the vice-captain repaid the faith with a match-winning performance.

With the bat, Rahul turned the Indian innings on its head after a difficult start on an overcast evening at the Adelaide Oval, with Rohit Sharma departing cheaply.

Bangladesh looked in control of proceedings early before Rahul engineered the turnaround with a stunning counter-attack.

At one point, he was batting on 26 from 24 balls before he broke free after hitting Shakib Al Hasan for a boundary in the eighth over.

In the next over, he hit left-arm pacer Shoriful Islam for two sixes and a four to race to his fifty from 31 balls, having smashed 24 runs from the last seven balls faced.

Even though he perished for 50, he helped India seize back the momentum and also took the pressure off Virat Kohli, who also hit a fifty to steer India to 184/6 in their 20 overs.

With the ball too, India found themselves in trouble as Litton Das hammered his way to a brilliant 56 from 24 balls with Bangladesh racing to 66 for no loss in seven overs.

After rain halted play for nearly 50 minutes, the target was revised as per the Duckworth Lewis calcuation to 151 in 16 overs.

Bangladesh looked in pole position as they needed another 85 runs from nine overs with all 10 wickets in hand.

But Bangladesh self-destructed after the rain break, with Rahul again at the centre of it.

Rahul produced a stunning piece of fielding at deep square leg to run out dangerman Das for 60 from 27 balls.

After Najmul Shanto had stroked the ball to deep square leg, Rahul quickly rushed to his left and in one motion picked the ball up and threw the stumps down at the non-striker’s with a direct hit with Das, who had slipped earlier, very hesitant while turning for the second run.

That run out was the turning point as Bangladesh’s batters kept throwing their wickets away from that point onwards to gift India the match.