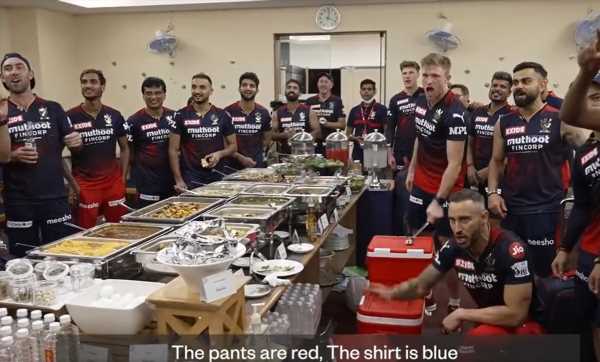 RCB celebrated the victory against the Rajasthan Royals on Tuesday night with a new team song.

It is a new season, new captain and new team song for RCB!

Skipper Faf du Plessis led from the front as RCB players chanted the song in high spirits after a solid start to the IPL 2022 season.

The lyrics of the team song were displayed in the dressing room as RCB players and members of the support staff joined the celebration before dinner at the Wankhede stadium in Mumbai.

The song debuted on Twitter with a caption, ‘A special victory song, appreciation for DK & Shahbaz, a happy captain & his confident troop – we bring to you all the reactions from the dressing room after RCB’s nail-biting win against RR, on Game Day.’

‘The pants are red. The shirt is blue. The golden lion is shining through. We are RCB. We are playing bold. Go to the final on our own,’ the lyrics of the RCB team song read.

‘A finer team you’ll never see, a finer team there’ll never be,’ it continued as the likes of Dinesh Karthik, Virat Kohli and du Plessis were seen singing with lot of energy in the Wankhede dressing room.

‘Those other teams don’t bother me, From RCB I am proud to be. We are RCB, RCB…’

‘It’s the first night of the team song. Probably very out of rhythm. But that’s okay, it’s just about celebrating our success. A night like tonight is something that’s worth celebration. There is a lot of energy, a lot of fun and we’ll mess it up but we’ll get better and better,’ du Plessis chuckled.