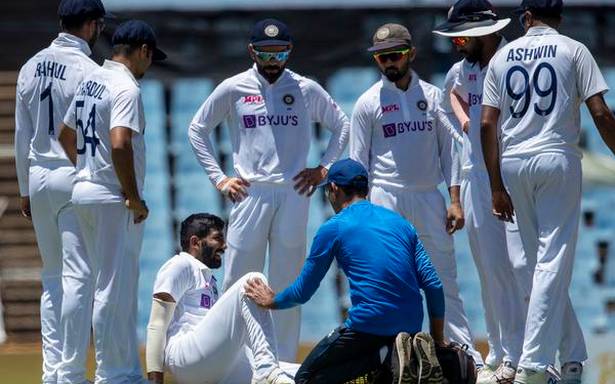 An ankle sprain forced India’s pace spearhead Jasprit Bumrah off the field on the third day of the first Test against South Africa, here on Tuesday.

Bumrah, whose 14-run cameo helped India get past the 325-run mark, dismissed skipper Dean Elgar before walking off the field.

He suffered the sprain while bowling the penultimate delivery of the sixth over of the South Africa innings.

On the last step of his follow-up, Bumrah’s right ankle twisted and he was seen in considerable pain as he got medical attention.

"Jasprit Bumrah has suffered a right ankle sprain while bowling in the first innings. The medical team is monitoring him at the moment. Shreyas Iyer is on the field as his substitute," a BCCI statement read.

Bumrah was seen getting his ankle heavily strapped after walking off the field without support. He bowled four overs, conceding 12 runs.

The Indian team would hope that some period of rest is good enough and he is fit to bowl in the later part of the South African first innings or at least in the second innings.