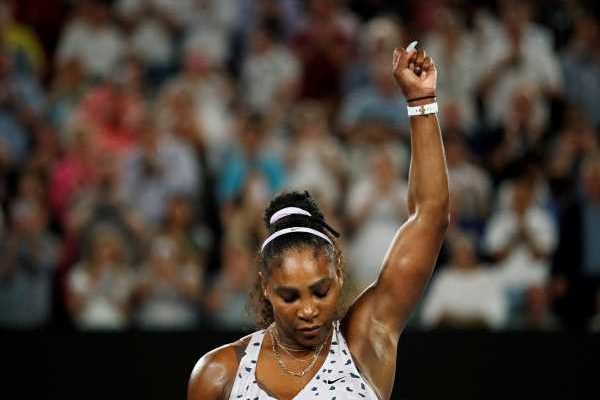 ‘If either sister is interested in exploring that route in retirement, of course we would certainly welcome any opportunity and would be happy to talk to them.’

Serena Williams could easily walk off the court and into the broadcast booth if she wants to, pocketing a handsome paycheck and boosting ratings for a sport that is losing star power, those in the business say.

Williams bid an emotional farewell to the sport she dominated for over two decades at the US. Open on Friday night and afterwards said she wanted to stay attached to the game.

“Tennis has been such a huge part of my life, I can’t imagine not being involved in tennis,” she told reporters.

“I don’t know what that involvement is yet.”

“We would absolutely love to have her and Venus in the booth,” he said.

“I’m not in those negotiations or anything but if you look at the John McEnroes, the Chris Everts, the people that are true legends in the game, by staying close to the game, their brands stay strong.”

An ESPN spokesperson said the network would be open to the possibility.

“If either sister is interested in exploring that route in retirement, of course we would certainly welcome any opportunity and would be happy to talk to them,” said ESPN’s Dave Nagle.

While some like NFL quarterback Tom Brady are more than ready to leap into broadcast, setting up a lucrative exit ramp from the playing field to the commentary booth before they’ve even called time on their career, others want to take their time before stepping in front of the camera.

Former world number one McEnroe has one of the most recognisable voices in tennis but waited 15 years after retiring from singles competition before signing with ESPN.

Others like 12-time major champion Billie Jean King have also carved out a spot behind the scenes of their sport. The tennis legend steps into her eponymous complex each year at the US Open, making media appearances on her own terms.

With her charisma, comfort in front of the camera and massive following, Williams would be a natural fit for TV and would provide a fresh perspective, said Neal Pilson, president of Pilson Communications and the former president of CBS Sports.

“She also can bring a unique contemporary approach to the game which is currently lacking since almost all the talent now working the Grand Slam events is at least one generation removed from playing the sport,” he said.

“The two questions you must ask are, does she have an interest in pursuing the opportunity given all the other family, business and life decisions she now must make, and is she ready to be critical and analytical of the playing skills of her former competitors?”

No matter what path she chooses, the 40-year-old American will no doubt continue to have an impact on the sport she helped revolutionize.

“While she may be old in the context of professional tennis players, she’s still a very young woman and still has many years of earning potential,” said Irwin Kishner, co-chair of the Sports Law Group at New York law firm Herrick, Feinstein LLP.

“Staying close to the sport can only enhance that and there are plenty of examples of superstar athletes who transitioned to the booth and have done so in a very successful and financially rewarding manner from Troy Aikman to Charles Barkley.”