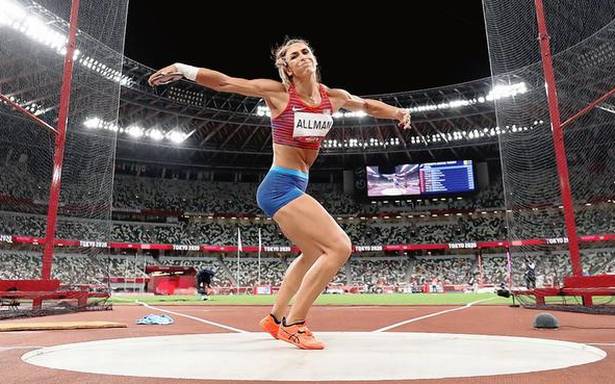 As a little girl, American Valarie Allman was a very good dancer and excelled in ballet, tap, jazz and contemporary dance. Impressed with her height and coordination, her high school coach advised her to take up athletics.

She attempted the sprints and high jump and came to discus throw by accident, trying the event with an eye on the throwers’ annual spaghetti dinner.

Allman danced her way to the discus throw gold with an opening-round effort of 68.98m that left the others fighting for minor medals at the Tokyo Olympics on Monday.

Indian hearts were wildly dancing too but in the end, Kamalpreet Kaur — who had raised hopes of bringing the country’s first-ever medal in athletics — finished sixth with a third-round 63.70m on a rainy night which left the throwing circle slippery midway through and the throwers were given a short break.

Kamalpreet’s national record 66.59m, which came in the Indian GP in June, would have fetched her the bronze. But that was not to be.

The 25-year-old Punjab athlete’s other two legal throws were 61.62 and 61.37. Her sixth place equalled Krishna Poonia’s sixth place at the 2012 Olympics, the best by an Indian discus thrower.

That put him on level terms with Juan Miguel Echevarria’s third round effort but the Greek triumphed as his next best jump (8.15) was better than the Cuban’s (8.09).

And Dutchwoman Sifan Hassan, who is aiming for a distance treble, won her first, the 5000m in 14:36.79s after a patient waiting game while Jasmine Camacho-Quinn took the women’s 100m hurdles.