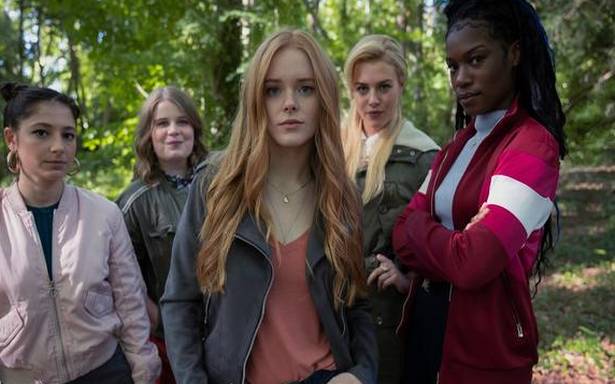 I am steeped, not in crime as William Brown would say, but in YA fantasy. Skipping between Sarah J Maas’s A Court of Thorns and Roses quartet where Feyre is sparring with the High Lord Rhysand, and Samantha Shannon’s dystopian The Bone Season series where Paige and other clairvoyants are waging an underground battle against vicious otherworldly beings.

So, it was not with much excitement that I plunged into Bloom’s (Abigail Cowen) first day at Alfea, a school for special students, and Fate: The Winx Saga did not disappoint. Grindingly predictable, the six-episode series is based on Iginio Straffi’s wildly popular animated series Winx Club. The line about the Sorting Hat was a tragic attempt at snagging some Harry Potter magic!

After a fire accident, Farah Dowling (Eve Best), the headmistress of Alfea, brings Bloom to the school in the hope of teaching her to harness her powers. Bloom meets the other girls, including her roommate, Aisha (Precious Mustapha) who can control water, Terra (Eliot Salt) an earth fairy, Musa (Elisha Applebaum) who feels others’ emotions and Stella (Hannah van der Westhuysen), a second year, who can control light and is the princess of Solaria. There is also bad girl Beatrix (Sadie Soverall) who can control electricity.

Bloom comes to Alfea at a time of crisis as scary creatures called The Burned Ones are attacking the school. There is also some plot to get the earlier headmistress Rosalind (Lesley Sharp) back. When Bloom gets to know she is a changeling, her quest for her parents forces secrets to come tumbling out. There is the mystery surrounding the death of Sky’s father, a celebrated hero during the earlier attack by The Burned Ones, and the destruction of innocent civilians in an attack. There is, of course, parties and dressing up, giggling girls and strutting, pretty boys.

Fate: The Winx Saga is not so bad that it is good. It is middling fare at best and it is time to return to Feyre and Paige.

Fate: The Winx Saga is currently streaming on Netflix