If the role of sports, and subsequently of sports biopics, is to inspire, Kaun Pravin Tambe does an adequate job.

There’s a simplicity and earnestness, in Tambe’s tale which is refreshing.

In the big bad world of cricket, and the unwavering jingoism associated with it, all the bowler dreamt of was playing the Ranji Trophy — the premier domestic tournament in India — for Mumbai.

The movie explores his slow rise from the gullies and maidans of Mumbai to the glitziest cricket tournament in the world, the Indian Premier League, at the age of 41.

The movie opens with Rahul Dravid addressing an audience, and wanting to talk not of Indian cricket legends like Sachin Tendulkar, Saurav Ganguly, V V S Laxman or Anil Kumble but about Pravin Tambe, modern cricket’s most famous late bloomer.

His tale of perseverance is a lot more relatable than Dravid’s single-minded pursuit of perfection.

Cricket is the constant in his life, the centre of his universe and he keeps coming back to it.

He competes with kids half his age for that coveted, elusive, spot in the Mumbai Ranji team, takes odd jobs to keep his cricket going, reinvents his bowling, switching from medium pace to leg spin in his mid-30s to keep the dream alive.

Shreyas Talpade, who made a splash in the Hindi film industry with his portrayal of a deaf-and-dumb bowler in Iqbal in 2005, plays the titular role with aplomb.

He radiates sincerity. He rides the highs and lows of Tambe’s character, keeps us engaged and firmly on his side while eternally searching for that pot of gold at the end of the rainbow.

While the movie does a good job finding humour and beauty of the everyday, it stretches stereotypes of how a Maharashtrian family residing in a chawl in Mulund (northeast Mumbai) looks, and behaves like.

The milestones in Tambe’s life, graduating college, getting married, having children, are treated more as a check-list, papered over with unremarkable music.

The characters push the story forward, giving it some depth, when the storyline keeps pinging between these topics: Family drama-cricket snippets-disappointment-too old to play.

Nothing is properly articulated.

Not even the one time when Tambe is engulfed by humiliation or despair, of having to serve his foe while working as a waiter at a nightclub.

Support characters come and go as they please.

An experienced actor like Ashish Vidyarthi, who plays the pivotal role of the coach that spots Tambe’s inherent talent for spin bowling and convinces him to change track late in his career, is reduced to spilling pearls of wisdom at every turn. For example, ‘Life ho ya cricket, all you need is one good over.’

We are currently in the golden age of sports biopics.

Unfortunately for Kaun Pravin Tambe, the cricketing bits turn out to be the least exciting.

Even though Talpade, reportedly, spent a few months copying Tambe’s bowling actions, it turns out to be a rather irrelevant detail.

Mumbai’s maidans are the beating heart of the sport in the city. Cricketers forged on these dusty grounds are famous for being ‘khadoos‘ (stubborn, no-inch given attitude).

But none of its grit or drama permeates the sanitised world of upbeat optimism that Tambe resides in.

The most bizarre plot, however, is that Tambe’s arch-nemesis in the story, the Joker to his Batman, is not a villainous coach, a power-wielding selector or an opportunist rival bowler, but a sniggering journalist.

A sports writer, who while fantasising about covering the World Cup, spends all his energy undermining Tambe and his talent.

The journalist, Rajat Sanyal played by Parambrata Chatterjee, who perhaps least believes in Tambe, disconcertingly also serves as a narrator. It’s like bringing in a cynic to see the dark cloud that the silver lining surrounds.

The whole movie is building up to the lucky break: When Tambe was finally picked out of obscurity by the Rajasthan Royals to play in the Indian Premier League.

By then, the player has been ‘demoted’ to the role of coach of his league team, the D Y Patil Sports Academy.

Without prelude, out of the blue, he receives a call from Dravid, mentor of the Royals, asking him to join the team in Jaipur.

Hop, skip and jump later, we are in Ahmedabad, witnessing the over, as Vidyarthi promised, that made the legend of Tambe.

With his team in trouble, Tambe changes the course of the match against the Kolkata Knight Riders, by claiming a hat-trick.

The real IPL footage is blended in with the reel shoots to recreate the iconic over. It’s nice to see the good guy not finishing last.

But the end, like the film, fails to tug at the heartstrings. 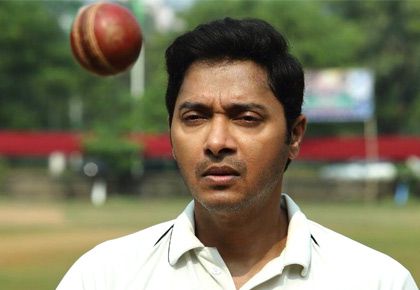