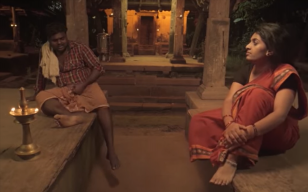 Ten films are being showcased on the academy’s YouTube page

Isolation is something that goes against a collaborative effort like cinema, yet it can be an idea worthy of exploration on screen.

As filmmaking, just like every other activity, came to a standstill following the COVID-19 outbreak, the Kerala State Chalachitra Academy made a call for short film scripts woven around the idea of ‘Isolation and Survival’. Myriad scripts, taking off on various tangents from this core idea, came up for consideration, from which the academy chose the ten best scripts and provided them funding to make films.

One of the most popular films of the lot has been Shanoj R. Chandran’s Oru Barbarinte Katha, with Indrans in the lead. With the lockdown in place, a barber is spending his days alone in his house attached to the shop, with the volunteer from the community kitchen bringing him food being the only visitor. Alone and bored, he shapes his own hair and moustache, slowly forming a Hitler-like image, which according to him goes with his own authoritarian nature towards his wife, a sweeper at a government hospital, who has left him. The isolation and loneliness makes his rethink his own past actions.

The closing down of all places of worship during the lockdown also becomes the subject for two of the short films. Kallante Deivam written by Santosh Kumar and directed by Devi P.V. has a rather cheeky, irreverent take on the subject. The goddess herself appears bored, not just with the lockdown but her own life within the four walls, and strikes up a conversation with a thief who is there to do his job. When the thief is about to leave, still in disbelief at that conversation, the goddess asks him, “Was that your dream or mine? Should be yours, for the dreams of women with four walls would be much short and limited.” Bhayabhathi written by Manoj Puncha and directed by Brijesh Prathap, has a Theyyam performer having a rethink about his art, when he is forced to take a long break due to the lockdown.

David and Goliath written by Father Jose Puthussery and directed by Father Jacob Koroth and Father James Thottiyil, is a delightful story built around two children who invent some creative ways to help their mother isolate after being in contact with a COVID-19 patient. Akam, written and directed by V.S. Jinesh, uses the concept of isolation to explore questions of gender and freedom, with the story of a woman who reluctantly discovers and accepts her sexual orientation during the days spent in lockdown with her friend.

Motorcycle Diaries, written by Ajayakumar M. and directed by Jamesh Kottakkal, looks at isolation from the perspective of an old Royal Enfield motorcycle, which is waiting for its young new owner, who had planned a cross-country trip on the bike, but is now in hospital after testing positive for the virus.