“We celebrate the Indian film industry’s success because it gives us entertainment, enlightenment and encouragement,” the Veep told the audience.

“We should focus on creating cinema which is entertaining, gives us solace, some message, reduces our tension and makes us think positively,” Naidu added.

“Positivity is the need of the hour. Don’t be obstructive, be constructive.”

Vice-President Muppavarapu Venkaiah Naidu presents the award for Best Actress to Kangana Ranaut for her performances in Manikarnika – The Queen of Jhansi (2019), where she played the historical figure, as well as Panga (2020), where she played a former kabbadi player who returns successfully to the game. Kangana posted a picture with her parents Asha and Amardeep Ranaut and wrote, ‘We all grow up with a deep desire to be worthy of our parents love, care and sacrifices… After all the troubles I give my mummy papa such days seem to make up for all those mischiefs .. Thank you for being my mummy papa I wouldn’t want it any other way.’

Unlike the 2016 National Awards ceremony, when she forsook the sari for Western attire, Kangana went desi this time. Not surprising, given her avatar as a champion of Indian values! RajiniSir remained trademark humble in his speech: “I’m extremely happy to receive this award… I dedicate this to my guru, my mentor K Balachander sir.

“I thank my brother Sathyanarayana Rao, he is a father figure in my life, for giving me great values…

“My friend, driver and transport colleague Raj Bahadur. He spotted the acting talent in me and encouraged me to join cinema.

“All my producers and directors who have produced my films, technicians, artists, distributors, media, press and all my fans, and Tamil people…” This is Manoj Bajpayee’s third National Award after Satya and Pinjar.

This time, he received it for Bhonsle, and he said, “I feel very happy to be honoured for a performance in a film which is very dear to me, that I’ve made with so much conviction and resolve. It feels great.” Manoj shared his award with Dhanush, who won it for Asuran. Manoj didn’t pass up the opportunity to get a picture with RajiniSir. 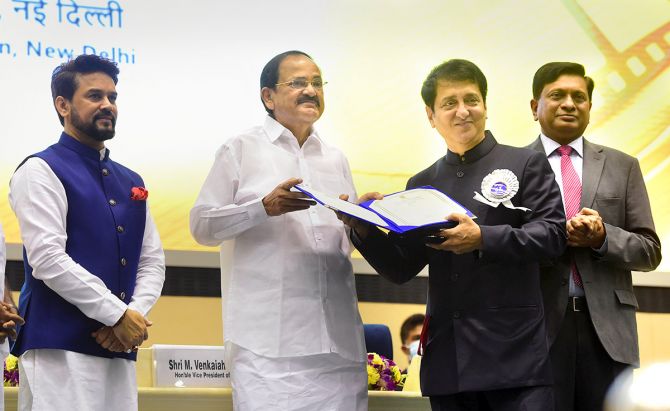 ‘A Moment of Pride for all of us at NGE today as we’ve received the prestigious National Award for #Chhichhore! Thank you @initeshtiwari for this special movie! We’re really grateful for all the love & dedicate this award to #SushantSinghRajput,’ Sajid posted on Instagram. 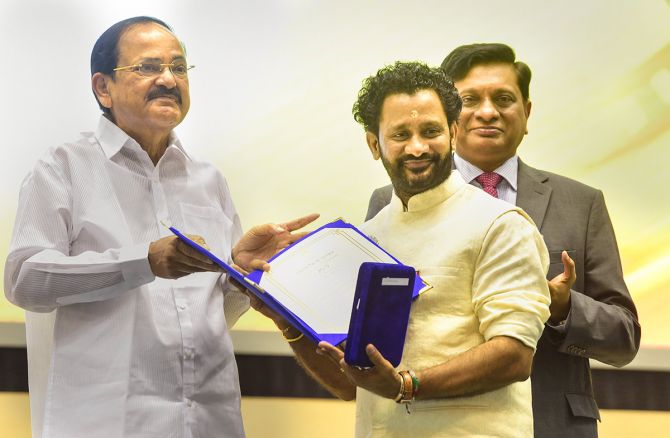 ‘I would like to let all my media friends to know that this award is shared between myself and my comixer Shri Bibin Dev…Don’t miss to add his name… thanks’, Resul tweeted. Pallavi Joshi won the Best Supporting Actress award for The Tashkent Files, which was directed by her husband Vivek Agnihotri.

She enjoys the moment with Priyadarshan and Censor Board Chairperson Prasoon Joshi. 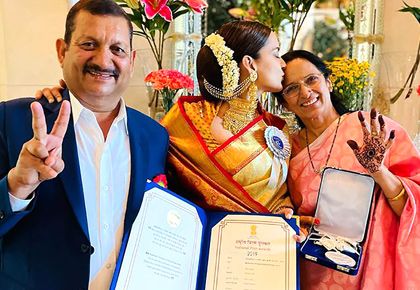