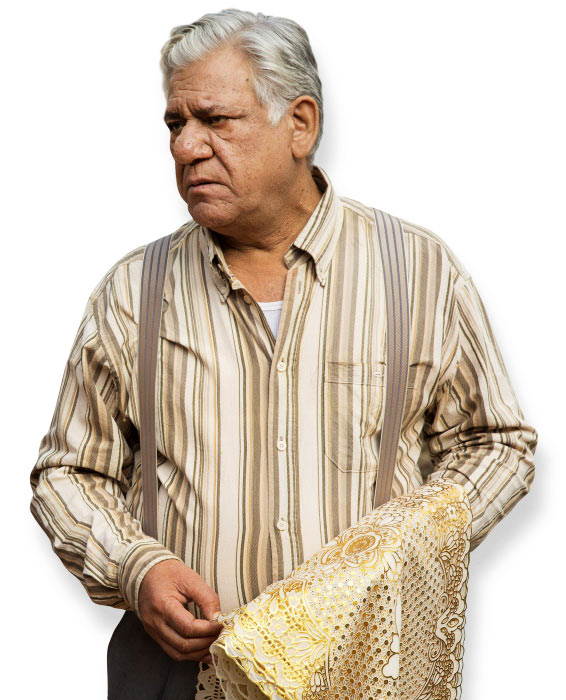 ‘In our film industry, there are not many opportunities for actors… Our films are not character based, they are hero and heroine based. The only roles we have for character actors are to play the girl’s or boy’s dad or a police officer…’

‘Now at my age — I am 64 now — there are hardly any parts. In the West, you could play a central character even at my age. But these kinds of films are not made in India.’

Om Puri started his career with the New Wave or parallel cinema in India in the mid-1970s.

He is the only Indian actor, who has featured in a number of projects in the West — some remarkable films like My Son the Fanatic, East is East, White Teeth and even a cameo in Wolf.

Most of his work, nearly 260 films, are Bollywood projects.

In The Hundred-Foot Journey, Puri plays the head of a family who leaves India after communal violence in Mumbai. He opens an Indian restaurant in a French village and later develops a romantic relationship with the woman (Helen Mirren), who is his biggest competitor in the neighbourhood.

Om Puri spoke to Aseem Chhabra/Rediff.com about his career in India and abroad.

It was a very pleasant experience and a very smooth journey.

You hadn’t done an international project for a while.

I think there was West is West. After that, I did Charlie Wilson’s War.

But it has been a while. How have things changed? I know you are constantly working in Bollywood.

There was a long gap. For a while I was very regular in British films, but I don’t know why this recession set in. Otherwise I was always doing something for BBC or Channel 4. Recently there was a television offer, but I couldn’t do it because I had minor surgery.