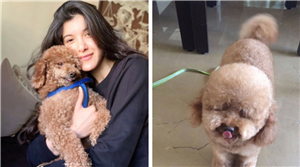 Shanaya Kapoor wrote a post for her dog Scooby, who has been with her for 12 years. It was a rather sad day for Shanaya Kapoor as she had to say goodbye to her dog, Scooby. She shared ten photos of her dog on Instagram with a rather emotional caption. “Rest easy my angel. These 12 years have been so special with you my partner, my baby, my best friend. I love you forever Scooby. You are always going to be home for me and forever in my heart,” she wrote. She shared a photo on her Instagram story as well.

Even before she has forayed into Bollywood, Shanaya has emerged as quite a star on social media. Fans eagerly look forward to her photos, and are quite in awe of her sartorial choices. In an interview a while ago, her mother Maheep Kapoor had expressed shock at the amount of attention Shanaya had received, on the first day she went public.

“It was thought of, that at this time in the morning we’ll go and debut. By evening, around eight or nine, she was already at one lakh followers. It was going crazy. Me and Shanaya were a little in shock,” she had said.

She continued, “I’m just so grateful for all these people, they’re just so sweet, and so kind. She’s got so many of those fan mails, you know?” She had also mentioned how her husband Sanjay got confused. “Some fan had written ‘love you, dad’, and Sanjay has messaged, ‘love you back, Shanaya’. I said, ‘but which Shanaya are you messaging?’ He was very confused. He said, ‘oh, this is not Shanaya?’ I said, ‘no’. So we weren’t expecting it, but it came, and it was overwhelming,” she said.

Shanaya will make her debut soon, and with a Dharma Production, no less, just like her cousin Janhvi and best friend Ananya Panday.