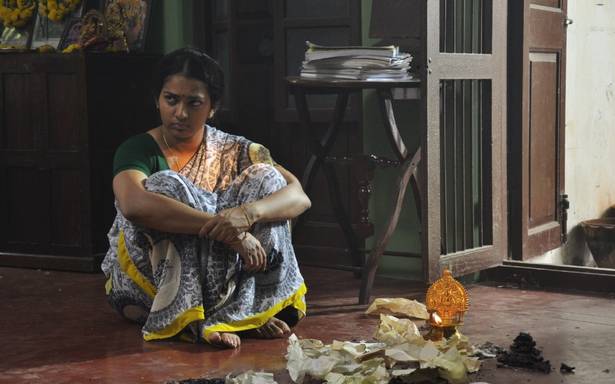 A majority of Tamil cinema is all about capturing unique events or exaggerating normal events. But this week seems different. If Maanadu is a time-loop thriller that is currently running in theatres, OTT release Sivaranjiniyum Innum Sila Pengalum (currently streaming on Sony LIV) also revolves around events repeating themselves…. but of a different kind.

Saraswathi, Devaki and Sivaranjani are women from different stratas of society but the routine mundaneness of life is a common thread that binds them. Using everyday events that women go through – including the multiple things that they have to do so that the men of the house are comfortable – director Vasanth S Sai makes a pertinent and powerful social commentary. Much like recent Malayalam film The Great Indian Kitchen, this too holds a mirror to how men act (and sometimes control) the womenfolk of the house.

The anthology begins with Saraswathi, who has to eke out a living in a lower middle-class setting. With a husband who seems indifferent (Karunakaran, a refreshing change from his comical outings) and a baby to take care of, Saraswathi’s life seems to be heading nowhere.

The women in the other two segments – Devaki and Sivaranjani – are from different time periods and come across as well-off; they live in larger houses and the people around them seem considerate, sometimes even jealous of them. Devaki has a prestigious job and Sivaranjani has won accolades in sports, but post marriage, their lives get sucked into the ordinary. They might be financially well off, but much like Saraswathi, they too are caught in a rut and unable to shake the mundane routine that is life.

Unlike many women-oriented films in Tamil cinema, which usually have the protagonist doing an extraordinary event to earn the claps, here, the very break from the ordinary is celebrated. The only exception to this happens in the Sivaranjani part, where a seemingly ordinary act gets the ovation in what is probably the only “filmi” sequence in the film.

The film is primarily about the women, but it also provides a mirror to how menfolk react to certain situations in the household. If a crying baby seems to irritate the man in one part, the lack of transparency with respect to a diary is a major pain point in another. Showcasing how men react to developing situations in ordinary households, director Vasanth drives home pretty significant points on how we lead our lives. His casting helps a lot; the three women are essayed by Parvathy, Kalieswari and Lakshmi Priyaa, who play them with ease and confidence. There’s some striking cinematography as well; the lights used in the Saraswathi segment and the camera placement inside a house in the Sivaranjani segment are aspects to savour. The slow pace of the film and the lack of action might be a put-off for some viewers, but the layered writing of the sequences and underlying message is a good payoff for the patience.

All three films have one young silent spectator – the child of the house – who’s watching life as it unfolds. There’s a wailing baby in Saraswathi, a naughty cricket-loving boy in Devaki, and a school-going girl in Sivaranjani; pretty much like us, the audience, they passively observe things that they have little control over. Will they grow up to be like their mothers or fathers, or will they tread unexpected paths? That’s a thought Vasanth leaves us pondering over.