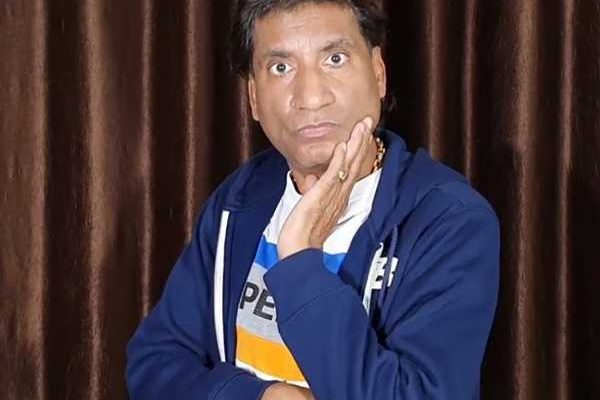 The first brush of fame came as an Amitabh Bachchan lookalike, but Raju Srivastav soon grew out of that shadow to carve an identity all his own as a stand-up comic and sometime actor who kept the laughs rolling in.

Srivastav, who died on Wednesday after more than 40 days in Delhi’s All India Institute of Medical Sciences, was only 58.

It was a life well lived, his career in comedy segueing into politics over the last eight years with him joining the Samajwadi Party and then the Bharatiya Janata Party.

The boy from Kanpur kept his audiences in theatres, on television and lately on social media platforms engaged with vivid societal sketches, be it about travelling in Mumbai’s famous locals or lampooning queues at wedding buffets.

Srivastava whose career predated the current comedy club culture, was first noticed for his resemblance to Bachchan and then gradually attained popularity as a mimicry artiste impersonating the superstar as well as politicians such as Atal Bihari Vajpayee and Lalu Prasad Yadav.

Different from the stand-up artistes of today who are more satirical in their approach, Srivastav’s humour — always in Hindi — made him hugely popular across the spectrum.

He launched a series of audio cassettes and video CDs and had a role in the popular 1990s Doordarshan superhero show Shaktimaan.

That’s when Srivastava was catapulted to fame with his set-pieces in the first season of the stand-up comedy show The Great Indian Laughter Challenge.

The kind of familiar face in the comedy and cinema circuit suddenly became a household name.

His sharp humour played out through his alter ego Gajodhar bhaiya, the lazy common man who had his finger on the pulse of the people. As Srivastav climbed the ladder of fame, he was rarely political, restricting his stand-up pieces to daily observations, parodies and impersonation of public figures.

In 2014, he got a Samajwadi Party ticket to contest the Lok Sabha election from Kanpur. He returned it, however, to board the BJP.

Prime Minister Narendra Modi nominated him to be part of the Swachh Bharat Abhiyan and he was also chairperson of the Film Development Council of Uttar Pradesh when he died.

His last Twitter post on August 9, just a day before he had a heart attack while working out in a Delhi hotel, is a video of himself endorsing Modi’s call to hoist the Tricolour in every household between August 13-15.

Off the comedy stage, Srivastav’s posts were commentative and critical.

‘Certain guidelines should be issued, the government should intervene and people should also boycott such things,’ he said.

And in 2021, he targeted Tandav, also on Amazon, for allegedly hurting the sentiments of Hindus.

While several BJP leaders raised concerns, FIRs were lodged in Mumbai and Lucknow against the producers of the show, starring Saif Ali Khan and Mohd Zeeshan Ayyub, as well as officials of the OTT platform.

‘I have been saying this for a long time that our feelings are being toyed with. A conspiracy to defame Hinduism is afoot. You should be ashamed of yourselves for mocking our Hindu gods and goddesses,’ Srivastav said in his strongly worded video.

Several eagle-eyed social media users called out the comic for his hypocrisy.

Film-maker Vinod Kapri, for instance, posted an old video where Srivastav can be seen in a spoof talking to Lord Brahma, promising him to arrange a meeting with Madhuri Dixit.

More recently, Srivastav spoke out on the controversy over Ranveer Singh’s ‘nude’ photoshoot.

While he walked the political track, Srivastav continued his comedy.

It was in his genes, said his brother Dipoo Srivastava.

“The comedy streak has subconsciously come into us too. He struggled before he attained huge popularity and became everyone’s favourite,” younger brother Dipoo told PTI.

It was a family of six brothers and one sister.

The comedy was perhaps foretold, but the young Raju may not have known it when he boarded a train from Kanpur to Mumbai.

Bachchan had sustained a near-fatal injury while shooting for the 1982 film Coolie and Srivastav just had to get there — to be part of the crowds standing in vigil outside the hospital.

“Rajubhai would eat vada pav every day and stand outside the hospital and pray for Bachchanji‘s life,” Dipoo recalled.

Bachchan recovered, but Srivastav, then just a teen, stayed on in Mumbai, determined to make a career in showbiz.

Like many others before Srivastav, this story of fame also started on the grimy streets of Mumbai.

According to his brother, Srivastav slept on pavements and parks, staying in slums and making do somehow.

He made it a point, however, to track newspaper ads about comedy shows being performed in the city.

The turning point came when T-Series’ Gulshan Kumar saw him performing at an event and offered to do an audio cassette show named Hasna Mana Hai.

Srivastav leaves behind his wife and two children.

When he died on Wednesday after 41 days on the ventilator, thousands mourned the man who made them laugh through the years.

Among those were the prime minister, Defence Minister Rajnath Singh, Uttar Pradesh Chief Minister Yogi Adityanath and a host of other politicos.

And somewhere up there, Srivastav may be smiling.