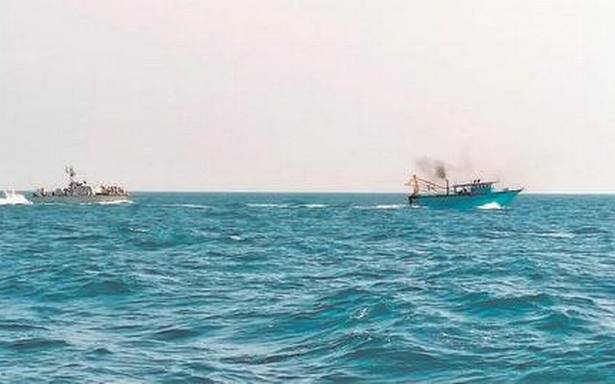 As many as 86 persons from India, travelling on 11 boats, were on Tuesday caught in Sri Lankan waters as they tried to enter the island nation, possibly fleeing the raging pandemic, the Sri Lankan Navy said.

“They were intercepted mid-sea and held there by the Navy. We immediately informed the Indian High Commission asking them to make arrangements for the Indian Coast Guard or Navy to take them back,” Navy spokesman Captain Indika De Silva told The Hindu.

When contacted, an official at the Indian High Commission here said there were “a few boats with Indian fishermen near IMBL which were stopped by Sri Lankan Navy when they inadvertently drifted towards Sri Lanka”.

While the Sri Lankan Navy said it prevented “illegal immigrants” from entering Sri Lankan waters, the Indian mission referred to them as ‘fishermen’. “After they were told to return, they have gone back towards India. We continue to believe that the matters related to fishermen of both countries should be dealt with in a humanitarian manner,” the official said.

Details of where the 86 fishermen came from were not made available. Tamil Nadu is observing the annual 61-day ban on fisheries to allow for breeding in the Palk Strait. During this time, mechanised boats from Tamil Nadu, that are accused of fishing in Sri Lankan waters, are usually off sea.

The Sri Lankan Navy said it has increased patrol along the island’s north and north-western coasts to prevent “illegal migration”. The development comes days after two women and two children from India were arrested in Sri Lanka for entering the island nation illegally by boat, Captain De Silva said. “One of them was a Sri Lankan refugee who was living in India, and another was a Sri Lankan woman who was undergoing treatment there.” Similar cases of refugees attempting to return to Sri Lanka by boat were also reported during India’s first wave of COVID-19 last year.

In the past two weeks, the Sri Lankan Navy apprehended four Indian dhows with 21 people, carrying “smuggled dried turmeric, cardamom, other consumer goods”, a press release said. “The Indian nationals and the dhows held in these operations were repatriated back to Indian waters, taking into consideration the prevailing spike in the transmission of COVID-19,” according to the media release.